A Soldier Killed Where The Photographer Stood 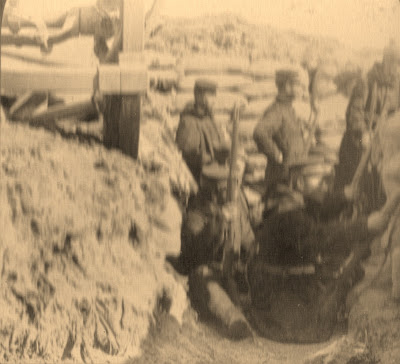 A small coincidence I came across while perusing a few old photos I had acquired of the Siege of Port Arthur.

The photo is by James Ricalton who, it seems, was a prolific photographer in the late 1800s and early 1900s. The photo on the top right shows Japanese soldiers at the Siege of Port Arthur (China) during the Russo-Japanese War in 1905.

On the reverse of the photo it tells of how Ricalton took this photo:

"Mr. Ricalton had to creep cautiously through sections of trench where Russian shrapnel was dropping and where bullets came with deadly promptness to investigate any sign of life or movement."

The photo is of Japanese soldiers who had captured a Russian fort.

The coincidence is that exactly where Ricalton had taken this photo, only moments later, "One Japanese soldier was killed having been seen by the enemy's sharpshooters while he was peering out between those sandbags."

If James Ricalton had not taken the photo when he did, and remained where he was, he would surely have been killed instead of the soldier. The photo would then never have been seen.

Also with the photo is a description of the action which had taken place. They described the Japanese soldiers as:

"... a heroic remnant that survived the horrors and stood for hours knee deep in a muddy ditch among the bleeding corpses of their comrades until the moment came for one more desperate charge. There was an inferno of fire and steel bayonets serving when there was no time to load and fire."

It shows the awfulness of war and how brave photographers, such as James Ricalton, must have been. They risked their lives to record history. Below is another photo, in the public domain, from the Siege of Port Arthur. This time it is of Russian troops looking down on the dead bodies of the Japanese soldiers in the trenches. 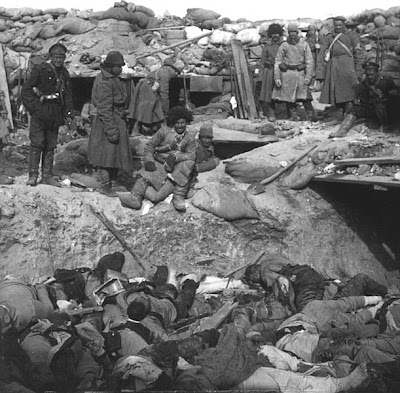 We must never romanticise war.