A Nation Seduced By Symbols And Expectation 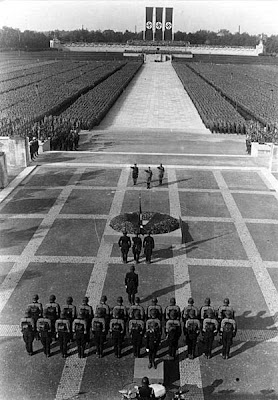 I recently wrote a post Hitler And His Divining Rod For Dark Forces. Powerful people interest me whether good or, in Adolf Hitler's case, evil. As my wife was born in Germany I also have an interest in that country.

While doing a little research I came across the following passage by the German poet, writer and thinker Heinrich Heine. He wrote the following prophetic work in The History of Religion and Philosophy in Germany

"Christianity - and that is its greatest merit - has somewhat mitigated that brutal Germanic love of war, but it could not destroy it. Should that subduing talisman, the cross, be shattered, the frenzied madness of the ancient warriors, that insane Berserk rage of which Nordic bards have spoken and sung so often, will once more burst into flame.

This talisman is fragile, and the day will come when it will collapse miserably. Then the ancient stony Gods will rise from the forgotten debris and rub the dust of a thousand years from their eyes, and finally Thor with his giant hammer will jump up and smash the Gothic Cathedrals.

Do not smile at my advice - the advice of a dreamer - who warns you against Kantians, Fichteans, and philosophers of nature.

Do not smile at the visionary who anticipates the same revolution in the realm of the visible as has taken place in the spiritual.

Thought precedes action as lightning precedes thunder. German thunder is of true Germanic character; it is not very nimble, but rumbles along ponderously. Yet, it will come and when you hear a crashing such as never heard before in the world's history, then you know that the German thunderbolt has fallen at last. At that uproar the eagles of the air will drop dead, and lions in the remotest deserts of Africa will hide in their royal dens.

A spectacle will be performed in Germany which will make the French Revolution look like an innocent idyll."

As with the Spear of Destiny which stirred something within Adolf Hitler when only 19 years old so, perhaps, within us and all nations there are symbols and the like waiting for their opportunity to come to fruition once more.

If we look at the German Nuremberg Rallies in the 1930s (the photo was from 1934) they were similarites to an invocation of Mars, the God of War. The population became involved in a formalised ritual with Hitler as the High Priest. The stadium was like a magic circle where the believers within were seduced with expectation by ritual drumming, fanfares, fluttering banners and the massed SS uniformed troops. At dusk over 200 search lights were aimed at the sky in what was called a Cathedral of Light.

Symbolism was everywhere at the time.

I guess today we have to wonder what may or may not be stirred in the Arab population as changes take place.

Further Reading:
Hitler And His Divining Rod For Dark Forces.