Nostradamus And His Magic Mirror 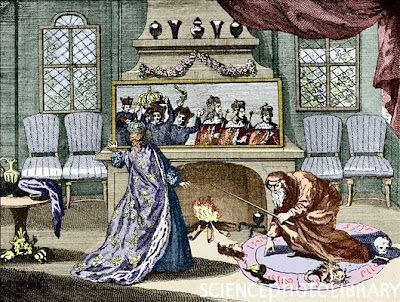 The picture shows our man, Michel de Nostredame (1503-1566), but now mostly known as Nostradamus, a latinised version of his surname.

It's said that he composed his quatrains in a trance like state 'and gazing into a bowl of water on a tripod'. This was an old way of predicting the future. He was then able to see and hear 'the Divine Presence' who inspired him with his writing.

The picture shows him not using a bowl of water but a 'magic mirror' instead. That's him in the circle with Catherine de Medicis (1519-1589), the Queen of France. She had summoned him to Paris to hear in advance of any possible threats or problems that may befall the French royal family.

The magic mirror in the pic shows the Queen looking at a series of Kings (on the right) who were deposed by Jesuits (on the left).

His magic mirror must have been impressive as Nostradamus later became physician and counsellor to the French royal family.

As for the Nostradamus predictions in general they are very obscure and could be interpreted in numerous ways. It's easier to link things, that have happened in the past, to his quatrains than reading them and seeing the future. In other words he's better in hindsight, which defeats the object really.