The Coincidence Of Life And Meeting A Wife 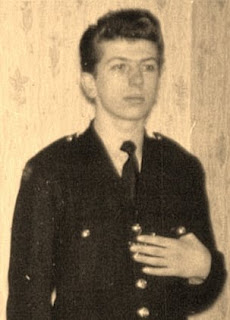 I've written previously that all of life might be considered a coincidence and that the odds against us being born, as per our present life, are extremely high. If our great-great-great-great grandparents (or even much further back) hadn't have bumped into each other at that wedding, or whatever, then there would be no us as we are now. The whole course of a lot of history would be different.

Of course, if we believe in reincarnation then maybe the aforementioned is slightly different. Some will say that we choose our parents, therefore we are born at exactly the right time and into the right circumstances.

No matter what our beliefs coincidences are always with us.

I left senior school at 17 to go into a London Police College at Hendon. It seems hard for me to believe now, but at the time I wanted to become a police officer - well a detective really.

After training I was stationed at Uxbridge Police Station, West London as Police Cadet 2647.

My wife is German by birth but when she was 17 she wanted to come to England and managed to get a job as a nanny. At the time I was at Uxbridge Police Station she also lived in Uxbridge - but we never met.

Ten years later I moved to Dorset a couple of hundred miles away. I was only in the police until I was 19. At a medical my eyesight wasn't up to standard. At that time new police recruits had to have perfect vision without spectacles.

By some coincidence my now wife also moved to the same town in Dorset.

I was working at a Finance company and needed a new member of staff. In conversation I asked someone who worked with me if they knew anyone suitable. To cut a long story short she recommended my wife to be - who, at that time, just happened to be looking for employment. And the rest is history.

From this it could be asked if our meeting was planned right from the beginning. Perhaps we were meant to meet in Uxbridge, but circumstances weren't as they needed to be. So it was postponed.

But all of life is a lesson. I was quite naive when I started as a police cadet but I learnt a lot about life and how strings are pulled.

There was another cadet at Uxbridge, who'd had a much better private education than I had. He always seemed to get on with the Superintendent in charge at the station. This puzzled me as I worked harder and felt I did a much better job than he did.

A Sergeant put me wise. It was the 'Old Boy' network of the Freemasons at play. The other cadet's father was a Mason, as was the Superintendent.

The Sergeant told me I'd make a good copper and should join the Freemasons at the first opportunity, if I wanted to reach the high ranks. Otherwise the other cadet would soon outrank me. At the time I hadn't even heard of the Freemasons.

I didn't see this as being fair, but that's life. There are hidden agendas and workings all around us manipulating and trying to control the masses for their own benefit - but that's another story.

Anyway, life is a coincidence, and that's how I met my wife.