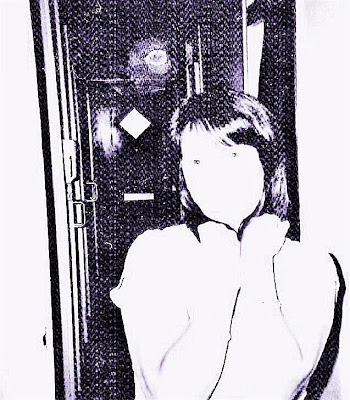 A 67 Not Out reader's paranormal story today. A ghostly tale from when Jan was a child. Thank you, Jan.

"You wrote a post recently about a poltergeist and this reminded me of an experience I had, though I'm not sure if it comes under that category. Maybe it's more of a ghost story.

This happened about ten years ago when I was eight years old. I know it may sound like this is some kid's made up story but I remember it so distinctly because my father had just died.

His passing away upset me very much. He had a heart attack and died in our house. Mum and my younger brother were also devastated. I'll never forget the picture of my mum's sad face, it was like her world had ended.

After the funeral we started to hear some strange noises. It was like someone was walking backwards and forwards in our upstairs hall. This became especially scary at night when we were in bed.

This continued but became less frequent but we would also hear a sort of humming noise in the kitchen. A bit like the sound my dad used to make when he was concentrating on some DIY job. Cupboards in the kitchen started to open and close by themselves.

Mum did her best to laugh it all off but even as a child I felt she was only putting on a brave face.

One of my school friends, Mandy, came to stay for the weekend. We were going to go horse riding as a special treat. We were in my bedroom when Mandy said she could hear footsteps. I made out she must be hearing things but then out of the blue the bedroom door opened and shut itself again with a loud bang.

We managed to giggle about it but I was getting quite scared. We then heard loud footsteps outside the bedroom door, which we thought was my mum. Bravely I opened the door but there was nobody there. I called out and mum was in the kitchen making us a snack.

This freaked Mandy out and she asked to go home. Mum phoned for her mother to pick her up.

Mum, my brother and I often heard noises, even music playing plus that humming noise. After what I think was about two or three months it all stopped. We still live in the same house today. Mum won't move as she remembers dad being there. Ten years on, to my knowledge, she has never had another man friend. She loved dad so much.

I did talk about the noises with mum a short while ago and she said she thought it was dad making sure we were all alright. But what it actually was, I'm not sure. I just know it happened."

Her Grandmother Visits from Beyond The Grave