When Will The End Of The Earth Come? 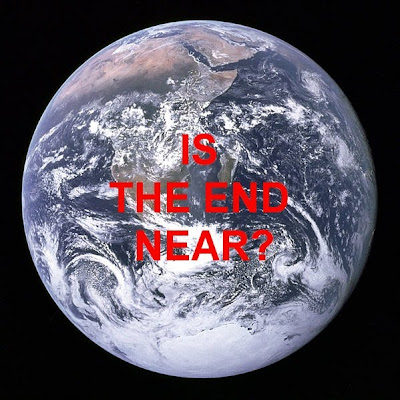 I didn't intend to return to the subject of the Jehovah Witnesses, following my post The Failed Predictions Of The Jehovah Witness, but a few things have been brought to my attention so, in fairness, here they are.

Firstly, in my post, I discussed how the Jehovah Witnesses have given dates in the past for the end of the world as we know it: 1914, within the lifetime of people born in 1914 and 1975.

Someone sent me a cutting from a Watchtower magazine dated August 1, 2010. This is what it says:

When Will the End Come?: Jehovah God has set an 'appointed time' to bring an end to wickedness and to install his kingdom government (Mark 13:33), But the Bible clearly indicates that we cannot calculate a specific date for the end.

Jesus said, "Concerning that day and hour nobody knows, neither the angels of the heavens nor the Son, but only the Father" (Matthew 24:36). Jesus did, however, foretell what conditions on earth would be like just before God brings the end. The end in imminent when all the following events are on a global scale ...

I won't list these signs but for those interested the following Bible passages are quoted: Mark 13:8 and 2 Timothy 3:1-5.

The above just confuses me as to why dates were previously given. The passage quoted shows quite clearly, under their own admission, that the date cannot be foretold.

The second point is about what makes some of us evil. It seems that the problem is Satan the Devil. To quote again from the JW's literature:

What is the root cause of this tainted environment? The Bible answers: "The whole world is in the power of the evil one" (1 John 5:19). This "evil one", Satan the Devil, is exposed in the Scriptures as a liar and a manslayer (John 8:44). He propagates evil through the influence of his world."

Okay, and the third point mentioned to me is that, according to the Jehovah's Witnesses, Jesus is actually the Archangel Michael.

To quote the JW's literature again:

"It is important to note that the human birth of Jesus was not the beginning of his life. Before Jesus was born, Mary was visited by an angel who told her that she would conceive a child by means of the holy spirit and that she should name the child Jesus. During his ministry, Jesus often spoke of his pre-human existence (John 3:13; 8:23,58)."

I'll resist making a comment on this and will leave readers to draw their own conclusions. No, I didn't mention reincarnation.