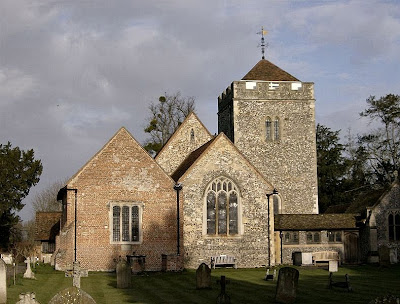 It's strange how our memories can take us back to long ago times, often mostly forgotten.

I had some old memories revisited after talking with someone I met. He was telling me about his life and said that he lived in Stoke Poges before he moved to Cornwall.

"I slept in the church graveyard at Stoke Poges," I heard myself saying, "When I was about sixteen. It was a scary old night."

The memories came flooding back. My friend Graham (I wonder where he is now) and I went hiking in Buckinghamshire which was, and probably still is, a bus ride away from where we both lived in west London. That's me in the photo below at the time. 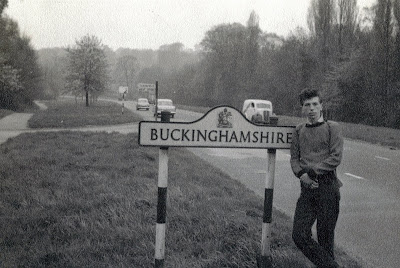 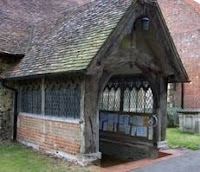 We were wandering around the countryside looking for somewhere to pitch our tent for the night. It was starting to get dark and we happened to pass a church, which we later found was in Stoke Poges. Tentatively we walked into the church graveyard and then saw that the church porch was open to the world.

We decided, as it was very quiet with no one else in sight, we would bed down in the porch instead of going to the trouble of putting up the tent somewhere else. Darkness was falling quickly and, as we sat on our sleeping bags looking out, we remembered we had a packet of dried soup we could heat up on our small primus stove, but we needed some water.

Great idea, but we must have both been a bit cowardly as neither of us wanted to walk round the graveyard, in the dark, looking for a water tap. It was ghostly enough just looking out at all of the memorial stones.

Eventually we agreed to go together and luckily found a tap quite quickly. We made our back to the porch in double quick time and without being molested by any stray spirits.

I slept okay and in the morning we were on our way before anyone else was about. We, of course, left everything as we had found it.

It was several months later that I found out that the church was where Thomas Gray wrote his famous poem 'Elegy Written In A Country Church-Yard in 1742. It just happened to be one of the poems I had to master for my English Literature A-level exams. At the time I thought I had a feeling for the poem because I'd been to the place where it had been written.

A meeting, a conversation and so on: you never know when you might just be transported back to times past. Time Travel is a reality within us. If we could find the right switch, button or stimulus we could probably move backwards, forwards and even sidewards in time.

The Mystery Of The Celtic Cross With A Dollar Symbol