The Buryan Town Witch And The Running Pig 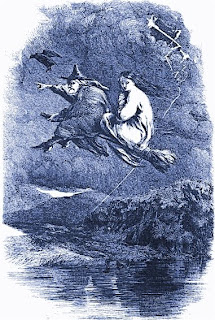 Nothing very serious today. Cornwall, where I live, was once known to have hundreds of witches. Virtually every village had its own witch or at least someone who purported to be one.

The black witches were commonly suspected of 'ill-wishing' or cursing a person with an evil spell. Often these curses appeared to work, causing crops to fail or a period of bad luck.

The good white witches were used for beneficial purposes and for removing any evil spells. There were constant small 'battles' between good and bad.

The following is an old traditional story of the Buryan-town witch.

Betty Trenoweth of Buryan Church-town in Cornwall was a known witch.

One day Betty went to the local market and was on the point of buying a pig when her neighbour, Tom Trenoweth, stepped in and bought the pig before she could close the deal. Betty was far from happy about this.

Tom soon had problems with his pig. From the very first day the pig ate and ate her new owner out of house and home but, strangely, became thinner and thinner.

The pig wouldn't stay home and wandered far afield, breaking through hedges and damaging other people's crops and gardens.

Tom was desperate so finally decided the only option was to sell the animal at Penzance market. On the way the sow first refused to cross a stream and then escaped. Tom followed the running pig through gorse, brambles and bogs.

Finally the pig was caught, but she was still full of energy. Her exhausted owner fastened her very securely to his wrist and off they set again.

At once a hare - everyone agreed that it was Betty Trenoweth in that shape - started in front of them with a cry of, "Chee-ah!" The sow ran after the hare at full speed, dragging Tom behind her as far as Tregonebris bridge, under which the pig became firmly stuck.

She could neither be pushed, pulled, driven, nor coaxed out. Tom sat there all alone and hungry until 'day-down' when - by a strange 'coincidence' - along came Betty Trenoweth in human form.

Expressing her surprise at Tom's obvious predicament, she offered to give him a two-penny loaf and to buy the pig for half the original cost.

A long argument ensued and Tom, weary of the whole affair, eventually gave in and told the woman she could have the sow.

"Chee-ah!" she whispered under the narrow bridge and at once the sow, docile as a dog, crept out and followed her home at her heels.

The moral of this tale is to think twice before crossing a Cornish witch - "Chee-ah!"