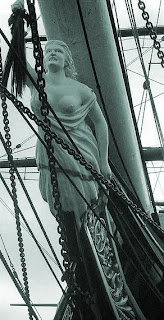 A paranormal experience today from a 67 Not Out reader who wishes to remain anonymous. Did she slip through some sort of time gateway or did she pick up sensations from the object she touched?

"I don't know what to make of some of my experiences, which I feel are paranormal. Friends tell me that it is only imagination, or even low/high blood pressure!

Here is an example and this happened in Cornwall. I was at a museum in Bude and found it all very interesting, especially about the old shipwrecks and the smugglers of olden times.

I walked past the figurehead of an old sailing boat and felt compelled to touch it. As I did so I felt a cold shiver and then a feeling of dizziness came over me. My head began to almost pulsate and my vision clouded over.

I felt nauseous and it was if I was being submerged into something. I felt it hard to breath. I had a sensation of being trapped and frightened.

My husband, who had been looking at something else, noticed how pale I looked and came over to me. By now I was sweating slightly. He asked me if I was okay, but I didn't hear him ask this.

He gently moved me away from where I was standing and as I let go of the figurehead it was as if I'd been saved, though I wasn't sure from what. My breathing normalised and I felt so much better almost immediately, though I still had a slightly sick feeling in my tummy.

We went for a coffee and I then felt fine again.

On the way out of the museum we got started talking to one of the staff. Much to my husband's embarrassment I told him about my 'wobbly' moment.

He explained that the figurehead belonged to an old trading ship which sunk in the nearby bay and all of the crew were lost. He also said that the museum was known to be haunted.

If I went back through time and on to the ship I can't say for sure but something happened, and it certainly wasn't low or high blood pressure. I believe I had the sensation of someone on the ship as it was sinking."