With Visualisation Everything Is Possible 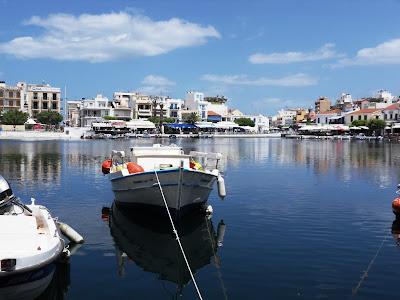 I've published a few blog posts about visualisation in the past including one about how to get car parking spaces using the mind. While in Crete recently I put visualisation to the test again to try and create pleasant days, where everything was as Karin and I would have wished.

I mentioned previously in my post about Crete coincidences where we always managed to get table 24 in the hotel restaurant we were staying at. There was a little more to it than this as before going for our meal, or on the way to the restaurant, I visualised getting this particular table - and it worked! Every time I did this we got our favourite table.

Another example was our favourite seat by Lake Voulismeni. At the end of the day, and before going in for our meal, we liked to sit looking at the lake and talking about our day. There was only really one seat and that was often occupied until, that is, I used the same visualisation technique. As we walked slowly around the lake towards the seat over and over again anyone sitting there would get up and move on just before we reached 'our' seat! I didn't have a 100% result with this but it worked enough times to say that we beat the odds.

The photo at the top of the post was taken from the seat. Being Crete, of course, it's no ordinary lake! The story is that the lake is bottomless - if that is the right word - and the Goddess Athena used to bathe in the lake. We didn't manage to catch her at her ablutions though.

Maybe that was because Lake Voulismeni has changed somewhat. In Athena's day it was a fresh water lake but in 1870 a small canal was cut through to the sea and the local harbour. And they now say that the lake is only 64 meters deep, so not quite so fit for a Goddess any more - but we still liked it.

The photo below shows the lake and the canal at the far side leading to the harbour underneath the bridge. 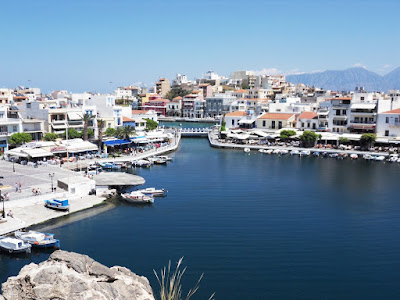 But getting back to visualisation, over and over again I've proved to myself that this works. I wonder sometimes why I don't use it all of the time. I think it's because I(we) tend to get too immersed in everyday negativity pumped out by the media. While in Crete, as I have written previously, I didn't use a computer, watch television, read newspapers, answer phones and so on. I therefore had the freedom to think and create for myself.

The point I suppose I'm making is that if we can get the table we want in a restaurant, or a seat by a lake then we can actually get almost anything we wish for - providing we believe that this is possible.