The Coincidence Of The Triplets Babies 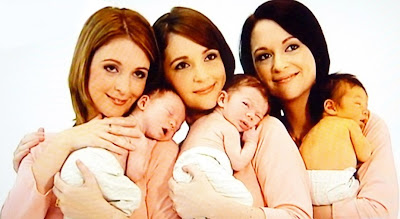 Todays post is about the closeness and coincidences of triplets.

Natalie, Lindsey and Deborah were in rooms 21, 22 and 23 in a Sydney hospital. The three 26 year olds are identical triplets and the room numbers coincidentally corresponded with the order in which they were born. They were in hospital - to give birth to their own children.

On April 17th this year two of them had their babies within hours of each other and the other was just two weeks behind. All three had boys.

None of this was planned, it just happened. One of the triplets, Natalie, explained about the coincidence, "All the nurses thought it was ridiculous, but it was meant to be for us to share this experience together. It's not like we all sat down and worked it out on a calendar."

And, of course, when they each individually went shopping for baby clothes they bought matching outfits for the babies, without talking about it to each other.

The triplets parents weren't surprised by this. Their father Rob said, "At Christmas time they buy us Christmas cards, exactly the same, and they would never have even discussed which one they were going to buy, it would just be the same one.

The three new mums are always in touch as they live just 15 minutes distance from each other and speak on the phone to each other several times a day.

Natalie, Lindsey and Deborah were born on the Isle of Man, UK but moved near to Sydney in Australia with their parents when they were four years old.

There is definitely some sort of special psychic link between them - after all, they even all got pregnant at the same time!

Photo by Anne Geddes for a television series she is working on called 'My Pregnancy' for Australian television.

Email ThisBlogThis!Share to TwitterShare to FacebookShare to Pinterest
Labels: Coincidence and Synchronicity, Triplets