The Oldest Magical Paintings Ever Found 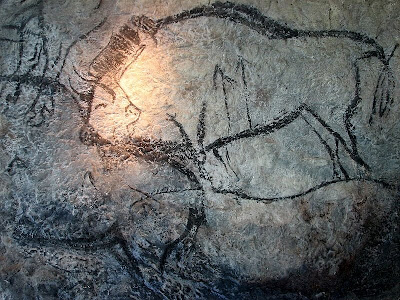 The oldest ever paintings were discovered on the walls of caves of Palaeolithic man in France and Spain and are believed to be over 20,000 years old. The painting at the top of this post is of bison and is from the Grotte de Niaux (caves) in the French Pyrenees.

But what made Palaeolithic man decide to dabble in a bit of art work? Of course, no one can really answer this question, despite what they claim, but the most likely reason for the paintings is: magic!

The hunters of the time may well have thought that if they created paintings of the animals they wished to hunt, and added a few arrows within the artwork, this would ensure a successful hunting trip. I guess though you would have to ask: why did they think this would actually work?

Perhaps it's because we all have within us a natural instinct about how what we visualise and what we see becomes a reality. This is very much the same as the thinking behind today's visualisation techniques, and how it is also suggested we collect pictures of the things we want. What we see we receive.

There still exists today a belief that certain images have magical qualities as in, say, witchcraft or the popular use of a lucky charm or talisman.

Over time these natural ideas have become less important to man and the function of art gradually changed.

Also found in French Pyrenees caves were small carvings which represented women and have become known as 'Venuses', similar to the picture on the right. They are mostly stylised with rounded, almost lumpy bodies and wouldn't be described as beautiful by today's standards.

These 'Venus of the Caves' are over 30,000 years old - so pre-date the paintings - and are carved from ivory from the tusks of mammoths. The theory is that they represent Mother Nature or Mother Earth and were used in religious ceremonies to bring abundance and fertility. Again a natural magic, perhaps inborn within man, inspired these Venuses.

It does appear that magic and beliefs were the foundations for the oldest paintings and carvings ever found on earth.

Some might argue that we should re-discover the basics of these old beliefs and once more align ourselves with Mother Nature.