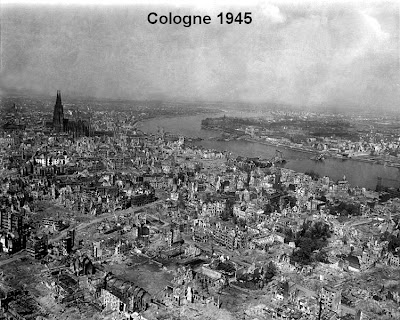 This coincidence story is by joynsonatkinson and is taken from WW2 People's War. This is an online archive of wartime memories contributed by members of the public and gathered by the BBC. The archive can be found at here.


"In late 1946 I was walking along the embankment of the river Rhine in the much bombed city of Cologne. I was wearing my army uniform for security reasons. I walked along the embankment with the Holenz-Holenz Bridge, now a twisted mass to my rear. The impressive spires of Cologne Cathedral were to my front.

Walking towards me was a German gentleman leading a very beautiful German Shepherd dog. I stooped to pat the dog and its master exclaimed, "Rex".

He then asked me if I was still in the army. I replied saying that I had recently been released after serving seven years.

He then inquired if I had ever served in the Channel Islands. I replied that I had trained in Alderney.

He then looked at me closely and his face broke into a huge smile. Shaking my hand vigorously he exclaimed, "I saw your photograph in the chemist's shop in St Anne's, Alderney."

My photograph, along with my comrade Michael and some other soldiers, had been taken outside St Anne's Church. It had been 'blown up' to half full size and had been exhibited in the chemist's shop window. A truly remarkable coincidence."