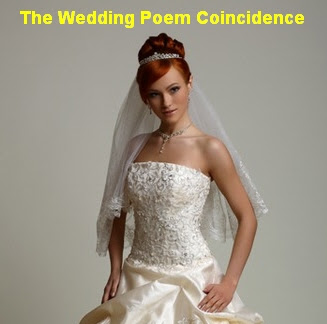 A coincidence story today from a 67 Not Out reader who wishes to remain anonymous:

"I am now in touch with a man I knew as a small child. We hadn't been in contact for over twenty years until about six or seven months ago when we met up almost by accident. We live about 400 miles apart but we are now always e-mailing each other and keeping in contact.

At the beginning of the year his sister-in-law got married and he told me about a poem she had read out at the ceremony to her new husband. My friend told me how lovely and emotional the poem was but he hadn't, at the time, been able to ask his sister-in-law what it was called or who wrote it.

A couple of days later I was in a book shop and started looking at the poetry books and decided to buy him one.

I e-mailed him to tell him I was putting the book in the post. I picked out one of the poems, which I thought he might like, and included this as an attachment to the e-mail. A kind of taster of what the book was like.

The poem I e-mailed him was the exact one that his sister-in-law had read out at her wedding!

I still can't quite believe it. To think that out of nearly 400 poems in the book, and all of the books in the shop, I selected this particular poem.

I feel very close to the friend concerned. I must be much closer than I think as the poem I chose was about how I feel about him, but I haven't told him this."

If you have a coincidence story that you would like published on 67 Not Out please use the contact button at the top of the blog. Thanks, Mike.