60 Things To Put Sparkle In Our Lives 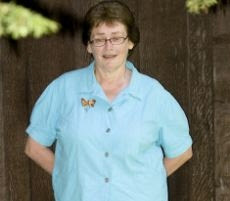 Lesley Evans, a librarian from Kent, England, has generated some interest in herself by becoming a newsworthy person. Why? Because she has just turned 60.

Okay, a lot of people turn 60 every year but Leslie wanted to do something to remember her 60th year, so she is determined to fulfill 60 of her dreams in celebration.

In other words she's made a list of 60 things she wants to do - well actually she now has only 11 more to complete. But this is no 'Bucket List' or 'Things To Do Before I Die' list. Leslie explains:

"I decided to compile a list of 60 things I've never done, and work my way through them to make this year memorable for all the right reasons.

It had to be a realistic list. Sixty tasks equates to more than one a week, and I didn't want to spend the year bankrupt and exhausted. Also it had to be achievable. It would be ridiculous for me to set myself a challenge I knew I couldn't do, as I would end up feeling disappointed and a failure."

So what sort of thing has she put on her list? These are a few she has already completed:

Apply to go on a television quiz. She's been on UK's Eggheads and this ticked off three of her items: (1) Being on the quiz itself; (2) Meeting two millionaires - she met two contestants who have won this amount of money and (3) to have her make-up done professionally - the TV company did this for her prior to the show. 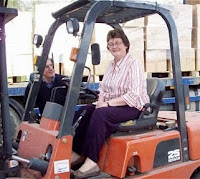 Other completed tasks are: To eat a squirrel casserole (yuk!); have a fish pedicure; visit a Sikh Gurdwara; wear a fascinator; drive a forklift truck (photo right); sing at a Karaoke; Go go-carting; ride a tandem bike; drive in a 40 ton truck; meet author David Nicholls; see 'As You Like It' at London's Globe theatre, play Nintendo Wii; be interviewed by a newspaper; drink sambuca; hold a tarantula spider and so on and so on.

Though this is maybe all a bit off subject for this blog I thought Lesley is quite inspirational. She shows how we can all put some sparkle in our lives, whatever our age or circumstances.

I've never created such a list myself (it would be very different from Lesley's list if I did!) but I have always believed that we should have seven things to look forward to. I've no idea where or even why I ever began to think this way - it just felt right. In my case one of the seven usually involves some form of travel but also small things like my grandson's first birthday party coming soon and looking forward to starting to read a book my son bought me for Father's Day.

I feel we should all be able to look forward to things that give us pleasure. How sad if we don't - but, as Leslie has shown, we can all do so with a little thought.

Life can be an adventure. Travel, and doing different things can open up all sorts of new avenues, ideas and opportunities - plus, of course, they often lead to meaningful coincidences, so that gets the blog back on tack after all.

Email ThisBlogThis!Share to TwitterShare to FacebookShare to Pinterest
Labels: self improvement