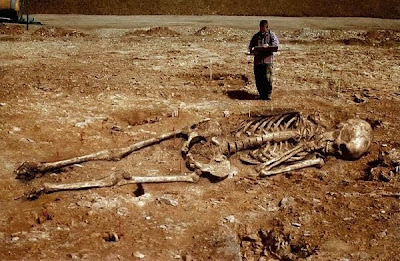 I was doing research for something on the Internet and arrived at the Russian Pravda web site, where I read the following article from June of this year. It's a translation from Russian so may not be perfect English:

"A team of anthropologists found a mysterious burial in the jungle near the city of Kigali Rwanda (Central Africa). The remains belong to gigantic creatures that bear little resemblance to humans. Head of research group believes that they could be visitors from another planet who died as a result of a catastrophe.

According to the scientists, they were buried at least 500 years ago. At first, researchers thought that they came across the remains of ancient settlements, but no signs of human life have been found nearby.

The 40 communal graves had approximately 200 bodies in them, all perfectly preserved. The creatures were tall - approximately 7 feet. Their heads were disproportionately large and they had no mouth, nose or eyes.

The anthropologists believe that the creatures were members of an alien landing, possibly destroyed by some terrestrial virus to which they had no immunity. However, no traces of the landing of the spacecraft or its fragments were discovered."

Obviously the article is a hoax, though I did also find the story on the Korean Times website. 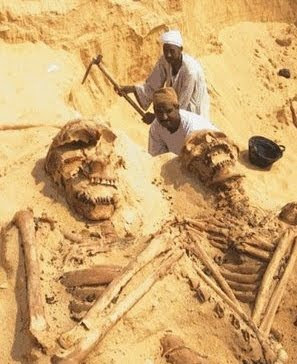 I say obviously a hoax because there are no photos or proof. The photos in this post refer to another 'find' of giants or aliens I found on The Missing Piece website. Again the pictures are generally thought of as fake.

And there are lots and lots of similar stories on the Internet. The Pravda article I mentioned, at the beginning of this post, gives other examples of where 'creatures' have been uncovered.

What I'm really getting round to is that hoax, or made up articles muddy the waters for anything that may just possibly be true. We see this especially with UFO sightings.

Think of Roswell for example. If we read everything on the subject we may well end up being swung either way as to whether this is fact or fiction. Governments are good at hiding and muddying the waters about things they don't want us to fully know about. We are also fed lies and untruths. Just look at the reasons for going to war with Iraq.

The problem is when we read the Rwanda alien story we say hoax, but who really knows ...

There will be a time when a dramatic truth will be made public. We just have to make sure that we don't all scream, "Another fake, it's a hoax!" Let's keep an open mind to all possibilities. One day information will be revealed that seems beyond our present understanding - and the rules and meaning of life will then change forever.