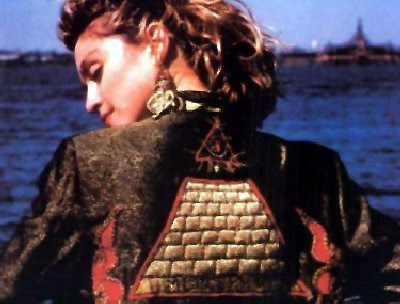 I had some unexpected free time this morning so I thought I'd see if there was anything I could find on the Internet that would be suitable for a future post. I didn't have any subject in mind.

I went into my blog stats first and saw that for today I had 1111 page views so far. I felt the number significant. It came to my mind that Elvis Presley's come back album, after being in the US Army, Elvis Is Back, was GZS-1111. (I have this on a vinyl original recording). So off I went hunting the King! 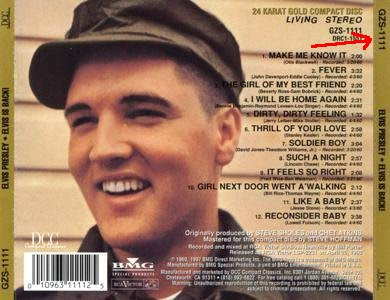 I've written previously about how I like early Elvis Presley rock music and somehow while Googling this I found how Elvis was supposedly controlled by the Illuminati! I hadn't heard this before despite having quite a few books about him. The website Educate-Yourself indicated that it was okay to copy their material so here's a sample:

"Elvis Presley was ... programmed by the Illuminati. We know that at times he went by code names, one which is publicly known was John Burrows. His group, called the Memphis Mafia, have talked about his ability to go into altered states of consciousness, even to seem dead."

"Cisco points out that Elvis’ twin brother was dead at his birth, and that Elvis knew that this gave him double spiritual power (according to Illuminati beliefs)."

"The Illuminati will often kill a twin, so that the other will get the power of two souls. From what we understand, Elvis Presley’s handler/programmer was Col. Tom Parker." Who was, of course, his manager.

"Elvis belonged to a team of four Illuminati men. Elvis is publicly known to have studied yoga, numerology, drugs, and received some new age spiritual training in an academy overlooking Pasadena, CA. He was an active member in the Theosophical Society."

"Elvis and the Beatles were chosen by the Illuminati to introduce rock music to the United States. There is no doubt about Elvis’ and the Beatles’ musical talent. Elvis’ close friend Wayne Newton is highly suspected as also being a slave. Elvis worked with Burt Reynolds and Jerry Lee Lewis who also connect in with the Illuminati’s mind-control operations."

"The authors are puzzled why Elvis’ grave, which had millions of dollars spent on its security, has his name misspelled. We are also puzzled why Elvis, who repeatedly stated he wanted to be buried beside his mother, is buried beside his father, who he privately stated wasn’t even his real father. Why has no one ever tried to collect insurance on Elvis’ death? Once again, it seems, the front stories that the public hears are full of inconsistencies. We believe that some people in the Illuminati know the true story about Elvis Presley. For sure Elvis’ mysterious mind-control programmer/handler Col. Tom Parker would know."

Another search and I came across a post about Madonna from a Christian blogger, Stacey Dames. She writes about how she used to be a Madonna fan but ...

"I was pulled from the wreckage by my Lord and Savior Jesus Christ. In honor of the One who saved me, I now write about this woman (Madonna) who has been used willingly since 1983 by Satan and the New World Order elites to further their end time agenda."

Stacey goes on to give a long list that 'proves' Madonna's links with Satan from when she started in show business. One of these links or associations is with Elvis Presley. By coincidence Elvis died on Madonna's birthday, 16th of August. This is what she writes: 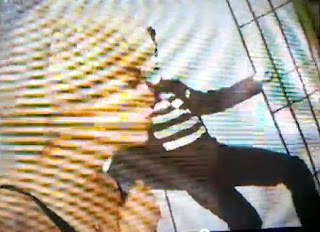 "1987: Madonna pays homage to the King of Rock and Roll throughout her career, linking herself to Elvis Presley in various ways. Elvis' death and the continued idolatrous celebration of him also happens to be her birthday - August 16th."

"Elvis Presley is a known occultist who is very fond of satanic theosophist Madame Blavatsky, and even reads to his audiences from her books after performances. Blavatsky teaches that Lucifer is the one true god, Jehovah is satan, and the enlightened one, satan, is coming to rule the planet during the Age of Aquarius."

"Madonna pays homage to the King by kissing a poster of him in her movie, 'Who's That Girl?'"

I glanced at my clock and as it was 11:11 so I thought it must be time to move onto something else!

So should I now ditch my very old collection of vinyl Elvis records, some will be worth a few quid? And I also have a couple of autographed photos of Madonna (see below). Must that now go too?

No way, I think I'll hang onto them, but it does make you wonder who or what you can believe.

There is no reality just our realisation of how things are.

Nearly forgot to include this!

"The Memphis Mafia spent the next five years keeping Elvis subdued, feeding him drugs that kept him disoriented and overweight. He struggled to keep up his former life, performing stage shows and spending time with beautiful women, but eventually the poisons became too much for him. Elvis Presley died in August 16, 1977, murdered by Freemasons in retaliation for the death of J. Edgar Hoover."

Of course you won't find anything of this on Wikipedia!

Again, there is no reality ... 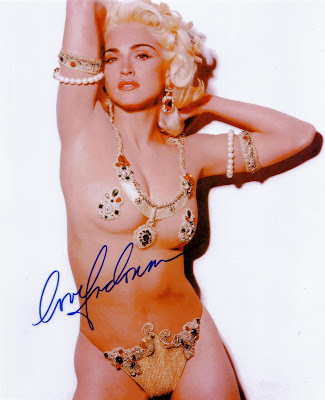