The Mystery Of The Rosetta Stone Coincidence 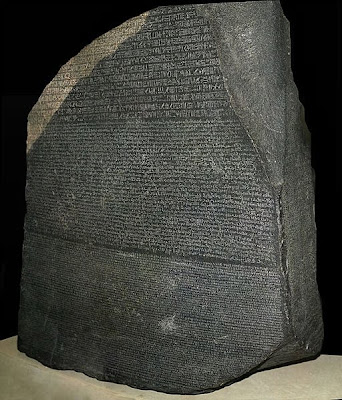 The Rosetta Stone, as pictured above, dates back to 196 BC and was inscribed in Memphis, Egypt on behalf of King Ptolemy V. It has been housed in the British Museum since 1802.

The stone was discovered, or rather rediscovered, in 1799 by a French soldier on an expedition to Egypt. It came into British possession in 1801 when British troops defeated the French in Egypt. As to the rights and wrongs, of where the stone should actually be kept, is another debate.

What this post is about is a coincidence that helped to translate the ancient Egyptian language on the Rosetta Stone.

Jean Francois Champollion and Dr Thomas Young are usually accepted as being largely responsible for deciphering the stone and for generally helping us to understand hieroglyphics.

Back in 1822 Dr Young was trying to make sense of the hieroglyphics but could only make out three names: Apollonius, Antigonus and Antiochus (which he read as Antimachus). He wasn't, therefore, too sure how to continue with his translation.

A short while later he received, from another part of the world, a papyrus, which was written in Greek.

Dr Young scanned this quickly and by chance his eye caught the same names he had seen on the Egyptian Rosetta Stone. They were slightly different: Portis Apollonii and Antimachus Antigenis but he realised that the papyrus was a translation of the hieroglyphs.

Incredibly, bizarrely, or whatever the papyrus document before him had survived some 2000 years, came from a different part of the world and had been received by him exactly at the time he needed it for his translation.

Dr Young later wrote about the coincidence: "Such a conspiracy of events would have been quite sufficient, in an earlier age, to convince people that I had not only the knowledge of hieroglyphics but the secrets of Egyptian sorcery as well!"

There is, it seems, a right time for everything.