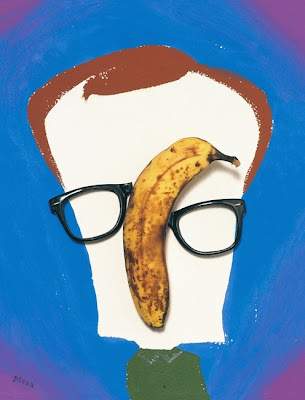 The above artwork is by Hanoch Piven an Israeli illustrator. As can be seen he has a unique style, to say the least. Much of his work is of caricatures of celebrities created out of everyday objects. This particular image is of Woody Allen - the banana nose and broken glasses. 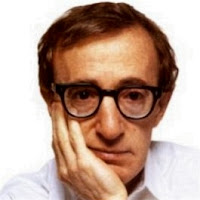 It's easy to wonder as to how he developed this form of art. It actually came about because of a cross between an accident and a coincidence.

Hanoch explained how this happened to Joann Plockova from the Czech Position website:

"Some objects fell on a drawing I was making. At the time I was struggling with my work.

I realized the importance of coincidence in my work. As an artist you need to pay attention to coincidence, to be aware of happy accidents. This was one of the big lessons that I learned."

Because of his new found style his portraits were soon featured in Time and The Atlantic. He also attracted work with Rolling Stone and The New Yorker.

I guess this is an example of a nudge from the Universe, via a coincidence, to put the artist on track to bigger things. It's a good idea to follow those coincidences if they show themselves, you never know where the journey may take you.

There is more of Hanoch Pivens work here plus his prints are for sale.