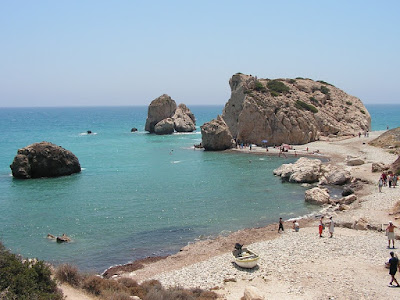 I've been thinking about having another holiday soon and when talking about this with my wife we began reminiscing about places we had been recently. One of these being Cyprus, where Aphrodite was born.

As happens when we sometimes get on a theme the next day someone we talked to had just come back from Cyprus and mentioned Aphrodite. Then she was mentioned in a newspaper and now a book I picked up at a flea market recently about Secrets mentions Aphrodite's Secret Army.

Aphrodite is the Greek goddess of love, beauty and sexuality and was born in a very strange way. According to legend she was born when Cronus cut off Uranus' genitals and threw them into the sea. From this Aphrodite arose from the sea foam and floated ashore on a scallop shell - thus the classic painting of her by Botticelli - seen below. 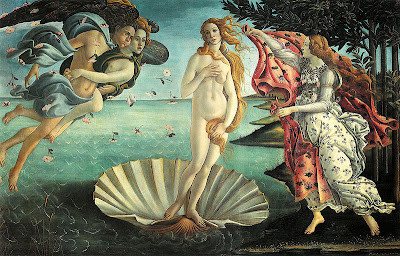 Other people claim that Aphrodite was born of Zeus and Dione, which makes some believe that there could have been two separate goddesses of the same name. The photo at the top of the post is of Aphrodite's Rock, near Paphos in Cyprus, also said to be her birth place.

Anyway, according to the book I picked up in the flea market Aphrodite's Secret Army originates in Babylon - present day Iraq. Here she was worshipped and because of her sensuality prostitution was considered sacred. It is said that all women were expected have sex with a stranger for money at least once in their lives.

Herodotus wrote in 450 BC of how women waited to do their sacred duty to the goddess Aphrodite. A man would throw silver coins into her lap and she was then obliged to have sex with him in the temple grounds, before she could return home. And it was these women who were considered to be Aphrodite's Secret Army.

As to whether all of this has any relevance to where my wife and I may have a holiday I have no idea!