A Link Between Paranormal Ghosts And UFOs 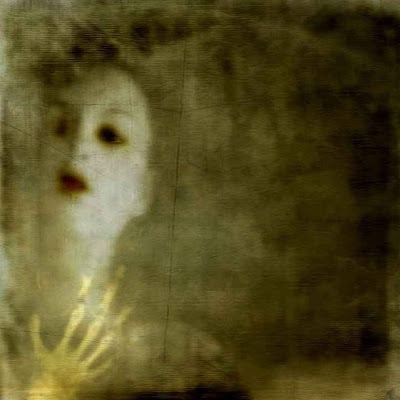 Recently there have been suggestions that it is possible to travel faster than the speed of light, which takes us almost into science fiction.

But supposing this is true, it then opens up the possibilities that much else we take to be fact, may actually be incorrect. It might mean, for example, that bizarre UFO sightings, like those of Carol and Steve from Gateshead UK, could be true. Even though main stream logic says they are fiction.

Carol and Steve aren't a publicity seeking couple but they have witnessed many weird UFO sightings, which are completely different from the norm.

Steve was working the night shift and Carol was home alone with her three year old daughter. She was restless and couldn't sleep and about 2 a.m she made herself a cup of tea to drink in bed.

While sipping her drink she could see a red light through the curtains. She looked out and saw what she describes as a cymbal shaped object over the roof tops opposite. The UFO then displayed various coloured lights and sped away into the sky.

Okay, nothing different there to many normal UFO sightings, but more was to follow. As she returned to her bed she heard a sort of rumbling noise and saw the same object - but this time in a miniaturised form, and it was flying inside her room!

The small UFO gave off a trail of glittering specks which made her body tingle. The specks returned to the UFO, which was about 18 inches in diameter, and the craft then left though the door.

The mini UFO returned 13 days later. This time she was in her daughter's bedroom. Again the tingling sensation returned and she screamed out to her husband, Steve. All he saw was a flash of light heading for the window. The craft, or whatever it was, flew through the window and away without causing any damage.

A further four nights later Steve was again on the night shift. Carol and her young daughter went to stay with her mother as she didn't want to be alone.

At about 4 a.m she heard a buzzing noise and her tingling body felt paralysed. The UFO had returned. But something even stranger - and some will say impossible - happened. Twelve weird creatures, but similar to humans, were also in the room. They were about two-and-a-half feet tall and were wearing white suits. Their faces appeared pale, delicate and almost feminine.

Some of the creatures approached Carol, conversing by clicking noises, and looked into her eyes.

This UFO haunting continued for over two months and all of Carol's family felt the tingling sensation. Their dog went into a frenzy whenever the buzzing noise of the vehicle was heard.

Then suddenly the mysterious visitations ceased completely and were never heard again.

At first the story sounds impossible: mini UFOs travelling through solid windows and doors; twelve 2ft 6ins creatures travelling in an 18 inch diameter craft and so on.

For fun, let's make it all the more puzzling and throw in something we would probably class as paranormal.

A well-off businessman from Manchester, UK was staying the night with his girlfriend. He was lying in bed asleep when he felt as if he was being invaded by some strange tingling sensation. It was like the air was filled with electro-magnetism. As he looked about in the darkness he saw that it was 3 a.m. Then he noticed something else.

A figure appeared in front of the window. He saw it was a woman and she looked to be quite solid and real. He noticed her features and clothing in detail and then for some reason he cried out. As he did so the woman faded away.

He woke his girlfriend and told her what he had seen. She immediately knew who the woman was from his description. It perfectly matched her dead mother.

It's interesting how this ghost story has certain similarities to that mini UFO: the tingling, the buzzing noise etc. If we look at ghost and UFO stories they can almost, at times, seem to interlink

It's easy to write off such things as nonsense but, if it turns out we can travel faster than light, we should perhaps open our minds to other possibilities. But I'll leave readers to draw their own conclusions!