One Good Tourniquet Deserves Another Coincidence 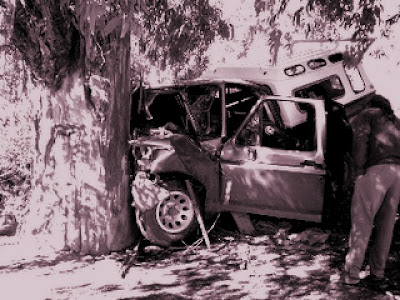 A classic coincidence story today from the 1930s.

A captain of the El Paso County Highway Patrol was in pursuit of a speeding truck in - well, El Paso County. The captain's name was Allan Falby.

Unfortunately for Falby the truck he was chasing slowed down, to go round a corner, and his own vehicle rammed into it at full speed.

The nasty collision ruptured an artery in his leg. As luck would have it a bystander, Alfred Smith, knew what to do. He rushed over and applied a tourniquet to stop the blood flow. An ambulance arrived in time to save Falby's leg. The paramedic said that, without Smith's prompt action, Captain Falby would have almost certainly died.

Falby recovered and after a few months was able to return to his police job.

Moving forward five years, Falby was working the night patrol and received a message that he had to assist an accident on US80, where a car had crashed into a tree. The passenger was in a critical condition.

Falby got to the accident scene before the ambulance. He found an unconscious man in the vehicle who had severed an artery in his right leg and was bleeding to death. Falby immediately applied a tourniquet and stopped the bleeding. Looking more closely at the victim he realised that it was none other than Alfred Smith, the man who had saved his own life.

Falby later joked, "It all goes to prove that one good tourniquet deserves another."