They Meet Up Again After 67 Years 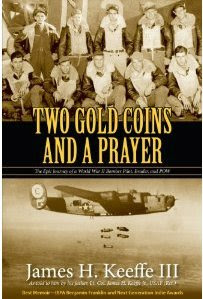 Here's a coincidence style story I found on the Official Google Blog. I wasn't particularly looking for it but had entered '67' into UK Google News, as a search, and this is what it came up with.

In this story two people meet up again after 67 years.

I won't relate the whole story as you can read this on the Google Blog. I'll just give a quick synopsis.

The story features a WWII B-24 bomber pilot who was shot down over Holland. For five months he evaded capture by staying in a 'safe house'.

In the attic of the house was also a Jewish family who had lived, or rather existed, in there for two years. One of the family was the eight year old daughter, Helen.

Helen and her family were eventually captured by the secret German police and spent the rest of the war in a concentration camp. As for the pilot he was also caught and was sent to Stalag Luft III Prisoner of War camp.

The pilot's son James Keeffe, III has now written a book about his father, also called James Keefe. Two Gold Coins and a Prayer: The Epic Journey of a World War II Bomber Pilot and POW

was featured on Google Books and out of the blue an email was received saying:

"..... I am the little girl from the Cohen family who was hidden together with Jim at the Jappe-Alberts family. I was 8 years old ...."

The full email, and also photos, are on the Google Blog but below is a short video of Helen and James (Jim) being reunited after 67 Years.