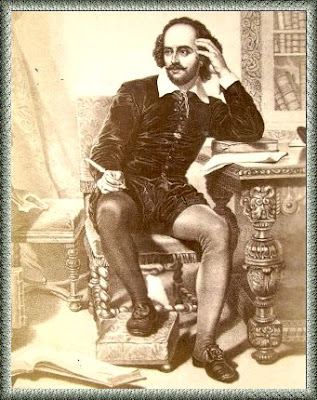 The evil that men do lives after them;
The good is oft interred with their bones ...

At school I never really appreciated William Shakespeare. But, as one of my exam subjects was English literature, I had to study some of his works. The quote above, by Mark Anthony from Julius Caesar, has always stuck in my mind - as there is often an element of truth in this.

I'll leave Shakespeare's works to those who enjoy him. The theme today is coincidences (for a change!) but lighthearted ones.

But, as Shakespeare was special, he also left this mortal coil on the 23rd of April in 1616. Oh, and 'mortal coil' comes from Shakespeare's Hamlet.

Some wonder if Shakespeare knew he was about to pop his clogs as he made out his Last Will and Testament on the 25th of March 1616, 30 days prior to his death.

There is quite a well known coincidence between the Bible and William Shakespeare.

The King James Bible was published in 1610 when the bard was 46 years old. If we take the aforementioned book and go to Psalm 46 and count the 46th word from the beginning this will be 'shake' - 'though the mountains shake with the swelling thereof.'

If we then count 46 words from the end of Psalm 46 the word is spear - 'and cutteth the spear in sunder'.

Put the two words together and we have ..... (no need to send in the answer!)

But there's more, though this is maybe stretching things a little.

So ... was there an 'in' joke going on by the translators and William Shakespeare? Guess it's no less likely than a lot of the other conspiracy stories on the Internet. A long time ago (40+ years) the London Times supposedly reported that 'the insertion of Shakespeare's name was a tribute to him, and a 46th birthday present, by some of the translators, who knew his work and might have known him personally.'

See also:
St.George And How He Slayed The Libyan Dragon