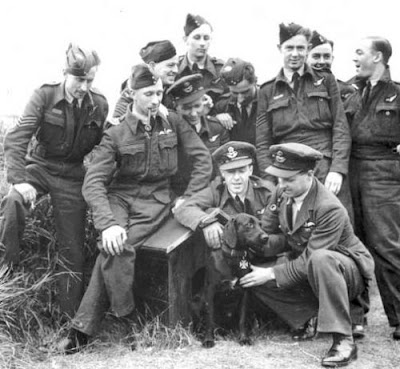 The WWII hero, Wing Commander Guy Gibson, was the lead pilot in the Dambuster's mission in 1943. They set off from RAF Scampton in Lincolnshire and his dog, Nigger, who was chocolate-black in colour, was killed just before they set flight. The dog's name was acceptable in England back in the 1940s. How times have changed.

The photo above shows the dog with the Wing Commander who is on the right stroking him.

The Labrador's ghost is said to still be seen guarding his master's old quarters at RAF Scampton. Wing Commander Gibson left instructions, before setting out to bomb the German dams, that his faithful dog should be buried outside of his office.

There have been lots of reported sightings of the dog but a recent, not very clear, photo - see below - shows the dog near a Dambuster's memorial. The photographer claims the dog simply appeared and then disappeared as soon as the picture was taken. Obviously skeptics will say it is simply another black Labrador. 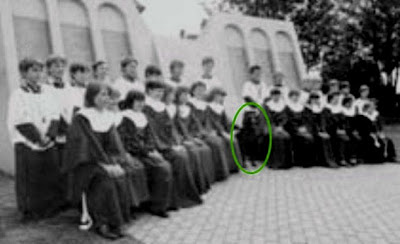 But this got the ghost busters involved to find the ghostly dog - and they believe they have located him. They actually claim to have gone one step beyond and also say they have made contact with Wing Commander Guy Gibson, who died on active service in 1944.

Lead investigator, Paul Drake, insists there is paranormal activity at the RAF base. He is quoted as saying, "One of our investigators felt a cold spot and when we measured it, it was eighteen inches, which is about the height of a dog.

The curator of the museum has told us that he has felt for years that he has had a presence following him and he definitely feels that it is that of a dog."

In the classic 1955 film The Dam Busters

the name of the dog was censored when the film was shown on UK television. In the US I believe they dubbed the dog's name to become Trigger.

And a small coincidence: The Dambuster raids took place in 1943, which was also the year the Wing Commander's dog was killed. The Dam Busters film mentioned was voted the 43rd best ever British film.

In his book Ghost Stations

Bruce Barrymore Halfpenny writes that the ghost of Nigger has been seen on numerous occasions around RAF Scampton and also around the Dambusters Memorial at Woodhall Spa.

Other World War 2 Posts:
The World War 2 Fractured Skull Coincidence
Hitler And His Divining Rod For Dark Forces
67 Years After The D-Day Landings They Meet By Coincidence