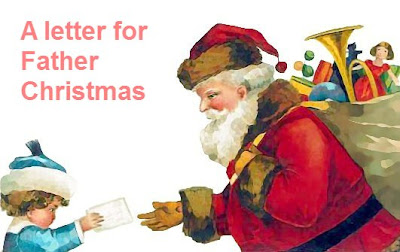 A little seven year old girl called Amy sent a letter to Father Christmas. This is what she wrote, including the spelling mistakes:


Dear Father Christmas.
Please will you bring me a
Syndy house,and some furniture
because I have lots of Syndys
and lots of Syndy clothes but the poor
Syndys have know where to live.
So could you bring them a house
thank you very much.
Love from
Amy xxxx
As was the tradition, 26 years ago, Amy left the letter by the fireplace chimney before going to sleep. Waking up on Christmas Day morning she was overjoyed - she received exactly what she had wanted. Her letter had done the trick. Plus she had been a very good girl as well, of course.

Amy Finlayson is now 33 and remembers writing the letter. She said, "I had very fond memories growing up and and I remember writing the letter to Father Christmas as if it was yesterday. I really wanted that Sindy house. I thought at the time the letter must have really worked but I soon forgot it because of the fun I was having with my gift."

Ian Hunter, 65, now lives in the house where Amy was brought up, he moved there in 2006.  He had been doing some renovations and removed the mantelpiece, where Amy had posted her letter. As he did so out fell the crumpled letter, 26 years after it had been written. Somehow Father Christmas must have forgotten to take it with him.

Through making enquiries with neighbours Ian managed to track down Amy, who now lives in Bristol, and is a mother herself with a seven year old girl, Violet, who has also been writing to Santa.

Both Amy and Violet were delighted to get the letter back.

Email ThisBlogThis!Share to TwitterShare to FacebookShare to Pinterest
Labels: Christmas, Coincidence and Synchronicity