Dog On A 37 Bus And Yoga Is The Devil's Work

A couple of things I have seen in the UK media over the last couple of days. One made me go ahhh! and the other grrrrr! 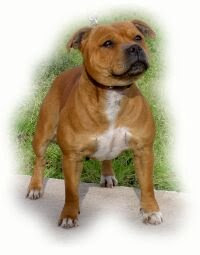 Dog Returns On Number 37 Bus
Five years ago Pat Oate's dog went missing. The mum-of-three had by now given up all hope of ever seeing T-Bone again, you can only search for a certain amount of time.

T-Bone was a Staffordshire bull terrier and the family's conclusion was that he had been stolen, perhaps to order. What Pat didn't reckon with, however, is her local number 37 bus!

Yes, after five years, T-bone was found on the bus which travels between Birmingham City Centre and Solihull. The driver took the dog to a local vet where they were able to scan him to see if T-bone had been micro-chipped - and he had. The vet phoned Pat with the good news and the family were soon reunited with their lost pet.

But where had T-bone been? Nobody knows or can offer an explanation. Pat said, "No one saw who T-Bone was with on the bus. We will try to see if there's CCTV on the bus, but the trouble is the person could claim they'd only just picked him up"

So a happy ending - and shows the value of having dogs micro-chipped.

Yoga Is The Devil In Disguise
The Vatican's chief exorcist, Father Gabriel Amorth, had declared that Yoga is the work of the devil!

To quote Father Amorth: "Yoga is the Devil's work. You think you are doing it for stretching your mind and body, but it leads to Hinduism. All these oriental religions are based on the false belief of reincarnation."

He didn't just leave it there, he added:
"Practising yoga brings evil, as does reading Harry Potter. They may both seem innocuous but they both deal with magic and that leads to evil."

"Satan is always hidden and the thing he desires more than anything is for people to believe he does not exist. He studies each and every one of us and our tendencies towards good and evil, and then he tempts us."

"My advice to young people would be to watch out for nightclubs because the path is always the same: alcohol, sex, drugs and Satanic sects."

There I was thinking that yoga is a spiritual discipline and not a religion - oh well, not the first time I've been wrong!