The Winds Of The Shacapa At Eden 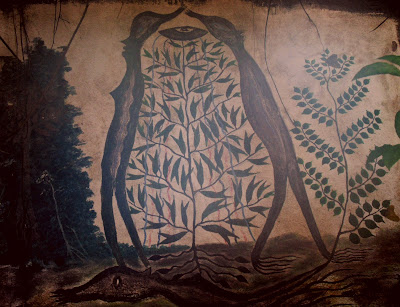 I came across the slightly faded wall painting - The Winds of the Shacapa - as shown in the picture above at the Eden Project in Cornwall, England.

The Shacapa (or Chacapa) leaves, a kind of palm, are made into a rattle for Shamanic and similar ceremonies in the Upper Amazon region. They are used rhythmically in a similar way to a Shaman's drum.

The Shacapa is said to draw impurities from the body. The Shaman rubs and shakes the Shacapa over the patient's body to remove and capture any unwanted spirit intrusions. Once captured these spirits are blown into the rainforest where the spirits of the plants are used to absorb and discharge this energy.

In the picture above the bands of colour from the universal eye represent the energies of the Shacapa. The photo below shows a well used Shacapa.

Further Eden Posts:
In Search Of The Birth Of Spirits At Eden
Eve Shows Herself At Eden
The Giant Rubbish Alien Monster At Eden