Creation And Destruction Of The Earth 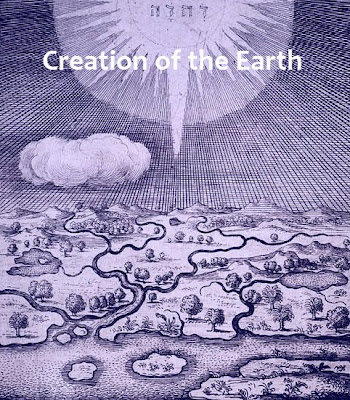 Not sure why I thought about this, but it's strange how in the beginning the earth was created in six days - and God rested on the seventh.  According to Genesis in the Bible, that is.  One problem with this (well, lots really) there wouldn't have been any 'days' until the sun and moon were created.

Also God created light and darkness - day and night - on the first day but, again, there was no sun or moon.

It always interests me how some people take the Bible as being, erm, gospel.

I suppose the argument would be that a day in the beginning wasn't a day as we know it.  It was much, much longer - a period of time. Someone, years ago, who reckoned he knew all about this sort of stuff, said a day was actually a thousand years.  "Why a thousand years?" I asked.  Great rumblings and mutterings and, "Because it was", was the answer.

But everything goes in cycles or periods of time (as we know it). Occultists talk of Cosmic Days, we are supposedly in the fifth - but maybe we are moving into the sixth, and this is what the Maya calender is really all about.

It won't be the end of the earth or mankind, but a new beginning, a shift in consciousness. It would be nice to think so.

According to James Redfield

the Mayan calender illustrates a time scale showing the nine Steps of Creation.  It is the ninth step that ends in 2012 - the first step beginning about 16 billion years ago when the universe was created.  All very simplistic.

A more fanciful approach was taken by José Argüelles in The Mayan Factor: Path Beyond Technology

. He claims that on August 13, 3113 BC the Earth began a passage through a galactic synchronization beam that emanated from the center of our galaxy, that it would pass through this beam during a period of 5200 tuns (Maya cycles of 360 days each), and that this beam would result in total synchronization and galactic entrainment of individuals plugged into the Earth's electromagnetic battery by December 21, 2012. He believed that the Maya aligned their calendar to correspond to this phenomenon. So there you go.

There's lots of doom and gloom and fanciful stories on the Internet, books on the subject of 2012 abound - well they would be, it's a lucrative market.

I think that Karl Kruszelnicki in Great Moments in Science

gets nearest to what I feel will happen on 21 Dec 2012 - a new calender will commence.

No doubt this isn't as exciting. I feel that man will continue to grow spiritually and will one day go on to inhabit other planets, just as the first settlers of our age travelled to North America, Australia and so on. Hopefully, being of improved consciousness, they will treat any 'natives' they may find on these planets with more respect than we did with the likes of the Native Americans and the Australian Aborigines. Or will it be us that is more 'native' like in comparison?