The Little Girl And The Lion 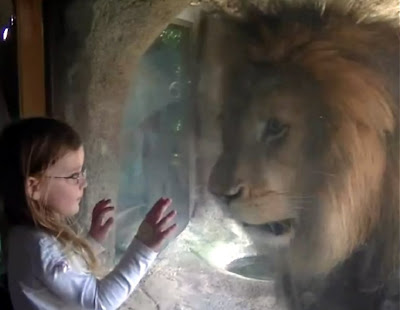 I have taken the above picture of the little girl and a lion from a YouTube video Sofia the Lion Tamer at Wellington Zoo, New Zealand. It's only 45 seconds long.

The uploader of the video writes: "Sofia the Lion tamer, my very brave daughter at Wellington, Zoo New Zealand."

During the film the lion, who is behind plate glass, attacks the girl but she doesn't flinch and simply says, "What's he telling me?"

As her father indicates, she's certainly brave and I was temporarily impressed. But I then came to my senses and was soon feeling sorry for the magnificent lion. He really shouldn't be on display like this, so that he can be annoyed and aggravated. Some zoos do a good job for conservation but a lion should surely be respected and roaming free. I hope this is explained to Sofia - and children everywhere.