Presentiments Sent To Warn And Advise Us 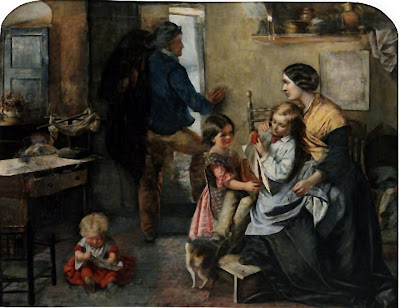 I'd never come across the word presentiment until recently. I suppose I should have done, but I hadn't so I looked it up in a dictionary:

'A sense that something is about to occur; a premonition.'
'Obsolete French, from presentir, to feel beforehand'

Okay I thought, it's a premonition. But then when I delved further I found that the dictionary probably isn't 100% accurate as there is a difference between a presentiment and a a premonition.

Yes, they are similar but presentiments are a feeling about how something may happen, without knowing what this may be. With a premonition there is a feeling or knowledge of what might actually happen.

Here's a couple of true classic stories of presentiments.

Mona Miller, like lots of people during World War II in Britain was evacuated out of London with her children to what was considered to be a much safer area in Babbacombe, Devon.

When she arrived she felt an uneasiness and she sensed that perhaps she should return home to London. Mrs. Miller is quoted as saying, "The feeling increased. The walls of my room seemed to speak to me: 'Go home to London.' I resisted but one day like a flash of light, I knew I must leave."

Within a few days she was on her way back to London with her children. On arriving back she received a letter from a friend she had made in Babbacombe. It read: "Thank God you took the children on Saturday. Early Sunday morning, Jerry (the Germans) dropped three bombs and one fell on the house where you were living, demolishing it and killing all the neighbours on either side."

A second example is the case of a US serviceman, Charles Bernuth. He was part of the invasion of Germany, again in WW2, and was driving down a German motorway with two officers as passengers. He then heard, what he described as, 'a small voice,' which told him something was wrong on the road ahead.

In his words, "I stopped, amid groans and jeers of the other two. I started walking along the road. About 50 yards from where I left the jeep, I found out what was wrong. We were about to go over a bridge - only the bridge wasn't there. It had been blown up and there was a sheer drop of 75 feet."

I guess these two examples of presentiments show the value of listening to our gut feelings, intuition or whatever you may wish to call such things. But not only listening to them but also acting on what we 'receive'.

Perhaps it's just me that hadn't used the word presentiment. I've now found it was often used in classic literature.

Presentiments! they judge not right
Who deem that ye from open light
Retire in fear of shame;
All 'heaven-born' Instincts shun the touch
Of vulgar sense,--and, being such,
Such privilege ye claim.

... as did Emily Dickinson.

Presentiment is that long shadow on the lawn
Indicative that suns go down;
The notice to the startled grass
That darkness is about to pass.

Charlotte Bronte also had a poem of the same name and wrote about presentiments in Jane Eyre.

Presentiments are strange things! and so are sympathies; and so are signs; and the three combined make one mystery to which humanity has not yet found the key. I never laughed at presentiments in my life, because I have had strange ones of my own. Sympathies, I believe, exist (for instance, between far-distant, long-absent, wholly estranged relatives asserting, notwithstanding their alienation, the unity of the source to which each traces his origin) whose workings baffle mortal comprehension. And signs, for aught we know, may be but the sympathies of Nature with man.