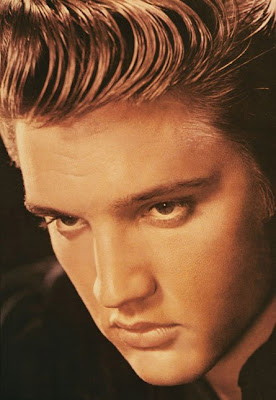 I like early rock music and in particular Elvis Presley. I don't mean the Las Vegas Elvis but the music and style he had before he started to churn out all of those movies. Loving You, Jailhouse Rock and King Creole were okay, but then things went downhill.

I'm also interested in why success comes to some people. In Elvis' case perhaps he was driven by being a twinless twin.

Jesse Garon Presley was born stillborn and Elvis arrived half an hour later - so part of him was missing, the soul who had been sharing his mother's womb for nine months.

It's reported that Elvis would hear Jesse talking to him, in his head, as a child and, prior to his death, he talked about joining his brother and mother in Heaven.

Of course, this has to be taken at face value but it is generally accepted that his mother, Gladys, talked about how Elvis had 'a destiny to do great things as he is living for two people' and said that, 'he has the power of two people."

Later in life Elvis considered Jesse to be his guide who also directed him to spirituality and to try and discover the meaning of life. He studied the Bible and other spiritual tracts. Dabbled in meditation, numerology and the like plus, unfortunately in his case, drugs as well.

Liberace (far from being my cup of tea) was also a twinless twin and talked to Elvis about the subject and how he himself had 'a compulsion to perform.'

When we talk about big name stars many will say that such things as a twin in the spirit world guiding the living twin as just a good publicity story. But such things happen to ordinary people as well.

I read on the Internet of how Autumn was obsessed with twins as a child and had the belief that all people have a twin somewhere in the world. When she was thirteen she received the news that she was in fact a twinless twin. Her sister died at birth. She writes:

"My twin visited a lot when I first found out. She now generally visits when I'm having a rough time with something or when I ask her to come with me for a big event and I'm scared to be by myself.

This past birthday I let a happy birthday balloon go for her too. The balloon stayed at my length and very slowly went to the end of street. It then went straight up into the sky, as if she was walking and then went back up to heaven.

"I lost my twin brother Michael shortly after we were born. I have felt a sense of loss my whole life ... I know Michael is always with me, an angel looking down on me. As a result of our birth I am visually impaired, totally blind, but I feel a strong connection with my brother."

I have an interest in twins because, before our son was born, my wife sadly had a miscarriage and lost twins. There is more to it than this, which I will keep private, but I was interested in what an anonymous person had written on a forum: "My son lost a twin in the womb at seven weeks into my pregnancy. I thought I'd lost him as well. The thing is I'm almost sure my daughter, who was born two years later, is that twin as they are so close."

I don't know, perhaps twins are the equivalent of soul mates or a close part of a soul group who need to be together. From what I have read though, twinless twins may well inhabit a private world where they are connected mentally and spiritually to each other.

I read how Elvis, before he died, had a dream where he and Jesse were performing on stage looking identical: same hair style and clothes. Now he is no longer on Earth there is no need for him to perform for two people. His burden will be lighter.

I'll end the post with the final lines of a poem by a twinless twin, antonyi:

"Knowing that I must be here for a reason, and must show it in every way
As now I live for two people, so must always succeed and win
As now I understand the world, as I know I’m a twinless twin"

Further Reading:
Twins Clairvoyance And A Dream
The Telepathy Of Twin Coincidences