The Peaty Smokiness Of The Islay Whiskey Coincidence 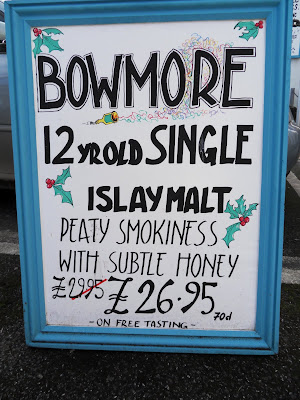 We went into Truro yesterday morning, about 15 miles from where we live in Cornwall, and saw the above sign outside of a wine merchants as we entered the city. We could have made our way into the city centre by several different routes and could, therefore, have easily missed the sign. 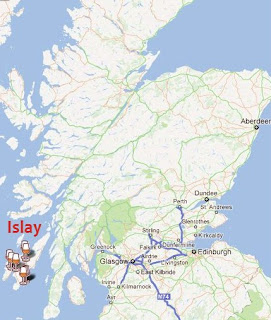 Somehow we got onto the subject of alcohol. We said we didn't drink much but often liked a glass of wine or two at the weekends. I mentioned that I also enjoy whiskey, in small amounts.

I told him about a whiskey that my late friend had brought back from somewhere in Scotland. It was the best I'd ever tasted as it had a definite smokey, almost peat like taste. But I had no idea what it was called or from what part of Scotland it came from.

He went on to tell us that when visiting Islay he bought a plot of land there - a very small plot! Only about one foot square. He did this as it entitled him to earn interest of one glass of Islay whiskey for every year he kept the plot. So if he went again in five years time he could enjoy his 'interest' of five glasses of the distinctive whiskey.

So the coincidence or synchronicity is that the day after speaking to the egg man I see a sign for the very same Islay whiskey. It's about two and a half times more expensive than a standard whiskey - and it's not for those that want to drink it with cola - but the distinctive taste makes it an enjoyable treat - if you like whiskey that is.

I took the photo yesterday of Truro Cathedral from the river, on a cold but bright winter's day - and it's a long way from Islay one of the Inner Hebridean Islands of Scotland.