The Tristan Stone And King Arthur And His Knights 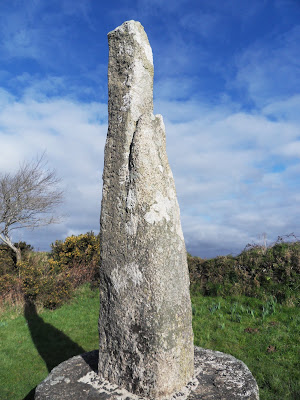 We were out and about in Cornwall and we stopped at the Tristan Stone, sometimes known as the Drustan Stone, as shown above. The stone is between Par and Fowey on Cornwall's south coast.

There are several stories about this stone and a probable link with King Arthur and the Knights of the Round Table. The one thing that is certain is that it dates back to the year 550.

On the north side of the stone a raised 'T' shape can be seen which is an old version of a Christian Cross known as a Tau. The 'T' can be seen in the photo below, obviously it has weathered somewhat over nearly 1500 years. 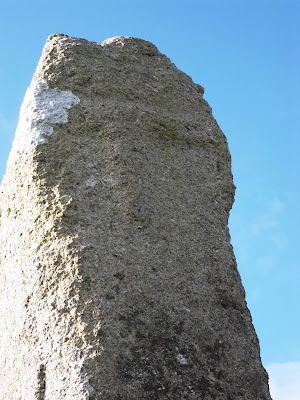 On the south side of the stone 6th century letters can be seen, photo below, again well weathered but translate as "Trystan here lies of Cunomorus the son."

Cunomorus was Marcus Cunomorus of the Medieval life of St Sampson and King Mark of Cornwall in the love story of Tristan and Iseult.

I mentioned King Arthur. The connection is that Tristan (or Trystan) was one of the Knights of the Round Table. 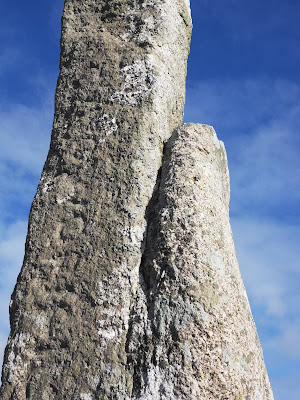 As for the the Tristan and Iseult story this is how it goes:

Isolde married King Mark of Cornwall, but had a love affair with Tristan. This continued after her wedding. King Mark eventually found out about the naughty goings on but forgave Isolde. Tristan, however, was exiled from Cornwall and he moved to the court of King Arthur.

Tristan travelled to Brittany in France, where he met Iseult. He was said to have been attracted to her because of the similarity of her name to that of Isolde. He did the honourable thing with Iseult and married her ... but in his heart of hearts he continued to love Isolde. See also another version about Tristan and Roche Rock

After looking at the stone for long enough we moved on to Fowey, one of my favourite places, but will leave that for another day. 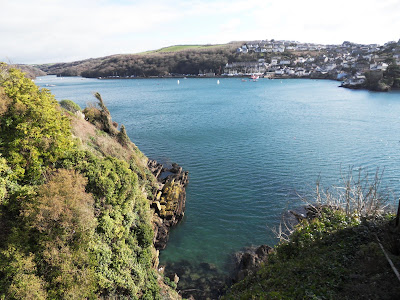