The Upside Down Map And How All Isn't As We Imagine 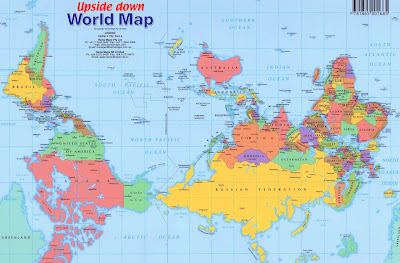 I remember that when I was quite young I couldn't sometimes get to sleep because of a conundrum that kept going over and over in my head.

This is what I couldn't work out: If I dug a hole from England, where I live, right to the other side of the world, perhaps to Australia, would I come out feet first? And if anyone stepped into the hole in Australia, which I'd made, would they then come out first feet in England, or would they get stuck half way because of gravity? There again, when digging the hole, would the 'dirt' eventually start falling on my head? Luckily, soon after this, I began thinking about girls so it didn't seem such an unsolvable problem, relatively speaking.

There is so much of life where we often just accept how things are - like maps. Why is north always at the top of anything and Australia is 'down under'? Maps are artificial as, in space and the universe in general, there can't be a right way up. So south could be at the top or east or any point of what we call a compass.

Maps are most likely shown north up because Europeans did a lot of the explorations at that time using the north star and magnetic compasses. And besides 'we' wanted to be towards the top of the maps for image purposes. Though I have read recently that in the Middle Ages some maps were made with East at the top in homage to Jerusalem and Christendom. At the bottom of this post (south?) is a 14th century world map with Jerusalem in the centre and east at the top.

How we perceive the world and our universe in general is in a 'normal' way that has been taught and accepted. Sometimes though it's to good to try and alter our opinions of how things are. Or at the least challenge them to make sure they are correct. It's easier to go along with popular opinion, of course, but nothing new comes of this, and most of us seem to sense that there is a different 'way' out there waiting to be discovered or rediscovered.

The upside down or south up map was first produced by a student in Australia. Stuart McArthur was fed up with US exchange students laughing at Australia being at the bottom of the world. So he made a different version and, on Australia Day in 1979, he launched the South-up map similar to the one at the top of this post. See how New Zealand and Australia are also in the centre at the top of the maps as well.

Looking at something from new perspectives might just alter our individual worlds, and not only on maps. 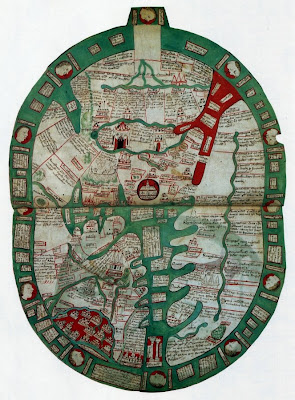