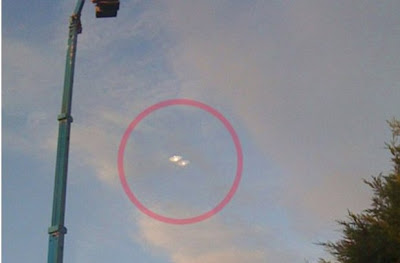 Not sure what to think of these two photos of UFOs taken just 30 miles apart. They were both taken on the 6th of January this year.

The photo above was taken by Ernestas Griksas outside of his home in Chatham.

The second, UFO photo below, was snapped by Josh Cummins as he was driving to work at Loughton, in Essex. He told the Sun newspaper, "I nearly crashed. I stopped to take this picture with my mobile. It was like the UFOs were surfing the clouds. They were there for 15 seconds then vanished. I wasn't a believer in UFOs but this made me think again." 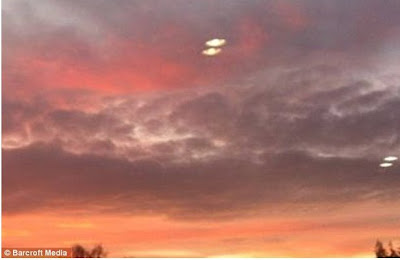 The two photos were captured approximately 75 miles from Rendlesham Forest which is sometimes talked of as the UK's Roswell.

The Rendlesham Incident took place outside of a US Air Force base at Woodbridge in Suffolk, England, shortly after Christmas 1980. Various lights were seen in neighbouring Rendlesham Forest by numerous servicemen, who investigated and found an apparent landing site.

This site was examined by the deputy base commander, Charles I. Halt, who took readings with a Geiger counter and was also witness to a flashing light in the direction of Orford Ness as well as star-like objects in the sky.

There is a famous memo by Halt, released in 1983, that told of his investigation. This is a copy of his words:


1. Early in the morning of 27 Dec 80 (approximately 0300L) two USAF security police patrolmen saw unusual lights outside the back gate at RAF Woodbridge. Thinking an aircraft might have crashed or been forced down, they called for permission to go outside the gate to investigate. The on-duty flight chief responded and allowed three patrolmen to proceed on foot. The individuals reported seeing a strange glowing object in the forest. The object was described as being metallic in appearance and triangular in shape, approximately two to three meters across the base and approximately two meters high. It illuminated the entire forest with a white light. The object itself had a pulsing red light on top and a bank(s) of blue lights underneath. The object was hovering or on legs. As the patrolmen approached the object, it maneuvered through the trees and disappeared. At this time the animals on a nearby farm went into a frenzy. The object was briefly sighted approximately an hour later near the back gate.

2. The next day, three depressions 1.5 inches deep and 7 inches in diameter were found where the object had been sighted on the ground. The following night (29 Dec 80) the area was checked for radiation. Beta/gamma readings of 0.1 milliroentgens were recorded with peak readings in the three depressions and near the center of the triangle formed by the depressions. A nearby tree had moderate (0.05–0.07) readings on the side of the tree toward the depressions.

3. Later in the night a red sun-like light was seen through the trees. It moved about and pulsed. At one point it appeared to throw off glowing particles and then broke into five separate white objects and then disappeared. Immediately thereafter, three star-like objects were noticed in the sky, two objects to the north and one to the south, all of which were about 10 degrees off the horizon. The objects moved rapidly in sharp, angular movements and displayed red, green and blue lights. The objects to the north appeared to be elliptical through an 8-12 power lens. They then turned to full circles. The objects to the north remained in the sky for an hour or more. The object to the south was visible for two or three hours and beamed down a stream of light from time to time. Numerous individuals, including the undersigned, witnessed the activities in paragraphs 2 and 3.

Are the two UFO photos genuine? Could they be linked in some way to the Rendlesham UFO incident, even though now some thirty years later? As with all UFO stories it's difficult to answer with any certainty.