Tecumseh And The Presidential Curse Coincidence 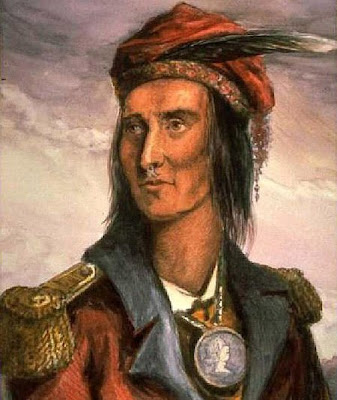 Tecumseh died, or rather was killed, at the Battle of the Thames, on October 5, 1813. His death signified the end of united Indian resistance against the Americans. Since that date USA Presidents being elected in a year ending 0 (zero) would die in office - and it is this that is said to be Tecumseh's curse.

How does the curse stand up. Pretty good actually.

1840: This was the start of the curse in the election of that year when William Henry Harrison came to power and had the shortest presidency of any USA President. He was President for exactly one month and then died of pneumonia.

1940: Franklin D Roosevelt was elected for a third term as President in the 1940 election. This came to an end on April 12, 1945 when he died of a cerebral hemorrhage.

1960: The youngest US President, John F Kennedy, was elected and, as everyone no doubt knows, was assassinated on November 22, 1963.

1980: Now this is where the curse hopefully ended. Ronald Reagan, the oldest US President, won the 1980 election and survived to tell the tale. But in saying that, the curse had a good go at bringing his Presidency to an end.

There was an assassination attempt on Monday, March 30 1981. While leaving a speaking engagement at the Washington Hilton Hotel in Washington, D.C, President Reagan and three others were shot and wounded by John Hinckley, Jr.

Some say that Reagan survived because of his wife, Nancy's involvement with mediums and astrologers. Joan Quigley, an astrologer, supposedly pre-warned Nancy that March 30th was a day of concern and would be a bad day for Ronald - and it very nearly proved fatal.

So has Tecumseh's curse finally been broken? Was there ever one in the first place? Time will perhaps tell.