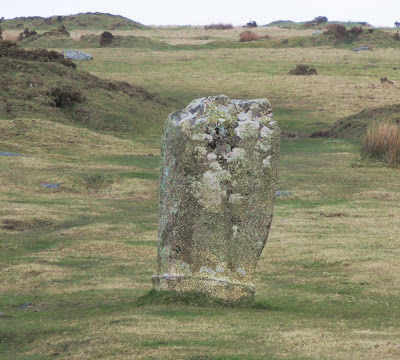 This is really a P.S. for my previous post The Mystery Of The Three Hurlers Stone Circles on Bodmin Moor, Cornwall.

While we were walking over the moorland it was especially pleasant, despite the overcast sky, because there was no one else about. Being March the holidaymakers and tourists hadn't arrived. This meant we could wander round the Hurlers Stone Circles without any interruptions, even the wild ponies had moved on.

This may now sound silly to some readers but Karin and I chose our favourite stones.

The photo above is the one I picked and Karin's was two along from mine, more rounded at the top. I unfortunately forgot to take a photo of hers.

"Let's give them a hug," I suggested.

There was no one about, other than a few sheep, so we did, despite Karin's lack of enthusiasm.

As I was next to my stone I could feel my heart almost glowing as it lay against the granite surface. There was a definite tingle - okay might just have been imagination, but the stones must have stored something over 3,000+ years. Ghosts are thought, by some, to be strong emotions locked into the buildings or rooms. That's why the some ghosts do the same thing over and over - a little bit of the past has been locked in the walls. The same could be said about stone circles.

We both left our respective stones and Karin said words to the effect of, "That's odd, my fingers started to tingle as I held the stones. Probably my imagination."

Okay, we didn't get any great meaningful insights, or see scenes from the past but the stones did seem to hold a power. If you are ever in the area go hug a stone! 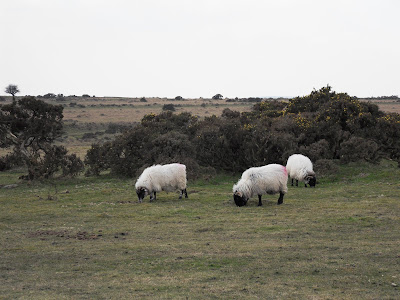