The Mystery Of The Three Hurlers Stone Circles 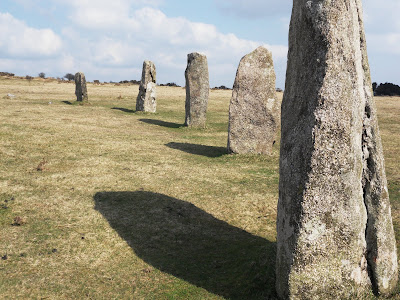 As I said in yesterday's post my wife, Karin, and I have been walking on Bodmin Moor in Cornwall with the prime aim of visiting the ancient Hurlers stone circles. Unfortunately it was an overcast day so the photos aren't too special but the sun did break through on occasions, as in the above picture.

The Hurlers are three stone circles in a line and are said to be dated from around 1500-2100 BC, which makes them 3500 to 4000 years old. Some experts date them from the late Neolithic period and others to the early Bronze Age. There are also two other monoliths, The Pipers, which are situated about 100m south-west of the center circle. 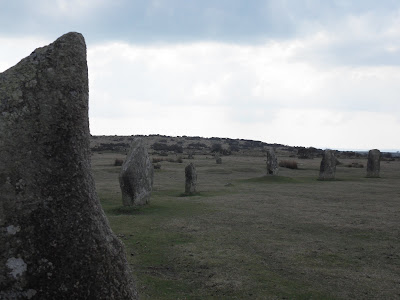 The Hurlers stone circles bring forth many questions such as : Why three of them, when one was enough for the likes of Stonehenge? What were they used for? Why would people want to create them? And so on, and so on.

The oldest answer comes from the late 1500s when a historian, William Camden, wrote in olde English: "The neighbouring inhabitants terme them Hurlers, as being by devout and godly error perswaded that they had been men sometime transformed into stones, for profaning the Lord's Day with hurling the ball." 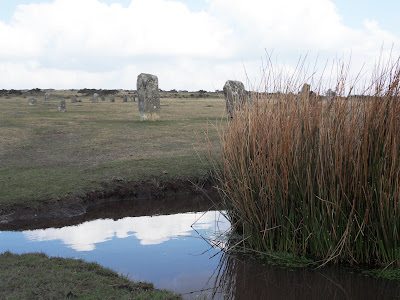 There were always simplistic religious answers back in the 1500s and 1600s: The Hurlers are men turned into stone because they dared to play the Cornish game of Hurlers on a Sunday! The two other stones were the Pipers who played music at the same time. I guess not many people will accept this as being true nowadays! Oh, and there is one other legend about how it is impossible to count the number of stones in the circles. 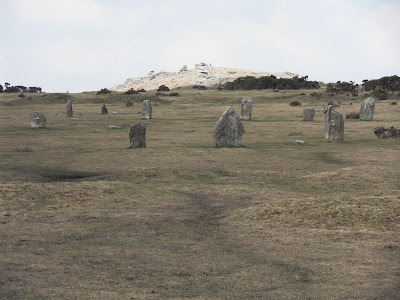 Today we have other ideas as to what the Hurlers were all about but the truth is that no one really knows. They may have been for some form of ceremonies or perhaps they defined a meeting place for nearby inhabitants. There is also a new(ish) theory that the stones are aligned to the constellation of Orion, but more on this later.

Since the three thousand years or so of their erection some of the stones have fallen and some have become buried. The following is a diagram showing the stones formations and the position of the Pipers - which could be for astronomical purposes or perhaps simply as an entrance or boundary markers. 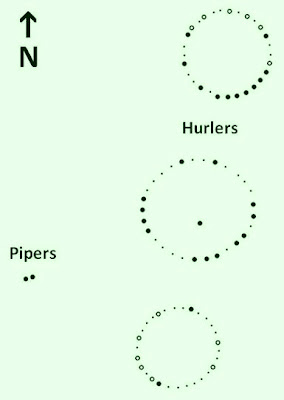 The two outer circles are just that: circles. But the middle is more elliptical. This is something I have seen with other such formations - at Woodhenge, for example.

As I've already said no one is sure as to the purpose of the stone circles. One theory put forward by Brian Sheen, a retired research chemist and astronomer of the Roseland Observatory, links the Hurlers to the constellation of Orion and that they are a primitive calender. 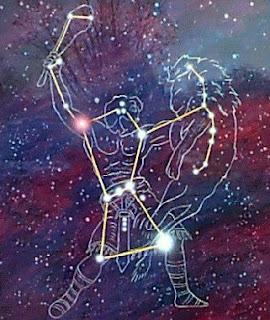 Mr Sheen explains: "As far as I can tell these Hurlers, a series of three stone circles, actually mirror the belt of Orion. Just once a year at the winter solstice Orion passes due south at midnight.

What happened is that this allowed the ancient people to tell the half way point between the autumnal equinox and the vernal equinox. This was important because they were starting to grow things and look after animals. They were becoming farmers instead of hunter-gatherers.

It confirms that the people that built the Hurlers around 1500 BC were fully aware of day length and season and had more knowledge of astronomy than we thought."

Bodmin Moor can be an inhospitable place when the weather is bad. There is about 80 square miles (208 sq km) of granite moorland, some parts with strange names as Brown Willy (the highest point in Cornwall), Rough Tor and Stowe's Hill, with it's Cheesewring - the high ground in the photo below. 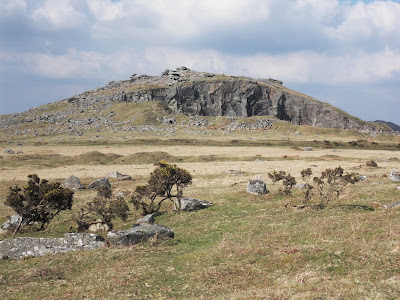 The Cheesewring has strange rock formations but they are all natural. The name is taken from it's resemblance to the piled slabs of a 'cheesewring', which was a press-like device that was once used to make cheese. 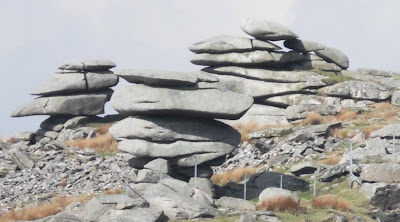 And, of course, being Cornwall there has to be a legend to the Cheesewring! This is how it is described on Wikipedia: 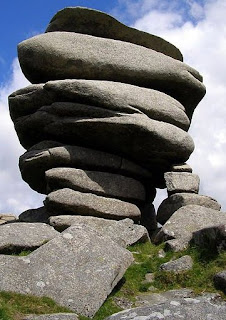 "The Cheesewring is the result of a contest between a man and a giant. When Christianity had just been introduced to the British Islands, the giants who lived at the top of the mountains were not happy about this. The Saints had invaded their land and were declaring their wells as sacred. One of the larger giants, Uther, was given the task of ridding their land of the Saints.

He confronted the frail St Tue, who proposed a rock throwing contest. If Uther won, the Saints would leave Cornwall. If St Tue won, then the giants would convert to Christianity. Uther took his turn first and easily threw a small rock to the top of nearby Stowe's Hill.

St Tue prayed for assistance, and picking up a huge slab found it was very light. One after the other, they threw their rocks, stacking them up in perfect piles. When the score was twelve stones each, Uther threw a thirteenth stone, but it rolled down the hill. St Tue picked up this fallen stone, and as he lifted it, an angel appeared to carry it to the top of the pile of rocks. Seeing this, Uther conceded, and most of the giants decided to follow Christianity after that."

This was our walk on Bodmin Moor completed for the day: Ancient Stone Rings, wild ponies and horses, strange natural rock formations, open spaces and, of course those legends and myths. 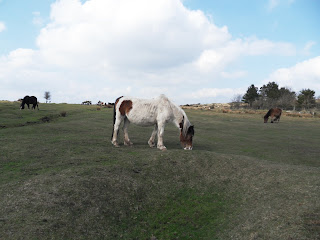