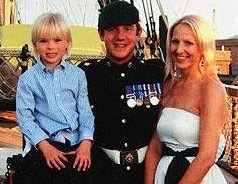 Christina Schmid from Cornwall is the widow of army bomb disposal expert Olaf Schmid who was killed on his final day in the field in Afghanistan. Her story shows the real awfulness of war.

Christina touched all Cornish and British hearts with her dignity and strength following Olaf's death. She now says that he 'knew' he wouldn't be returning alive from Afghanistan and gave her 'instructions' as to how she should conduct herself when his body was returned.

Olaf told her it was essential that she should retain her composure out of consideration for the rest if his bomb disposal team. He told her, "If they've seen me blown up, the last thing they need is to see even more pain and devastation."

Olaf was killed six months later, on his final day in Afghanistan, as he was trying to defuse his third bomb of the day.

Grieving desperately Christina somehow had the strength to meet the plane flying back his body and to be at the side of the road as his hearse was driven through the town of Wootton Bassett. As the car approached she and Olaf's mother stepped forward with flowers. She somehow managed a smile and started to clap. She said, "It was instinctive - the only way I could think of to say publicly 'I'm so proud of you.'" She believes that Olaf gave her strength that day to carry out his wishes.

Being in the army Olaf had seen terrible things like when he was serving in Kosovo in 1999. Thousands of Albanians were slaughtered. One of his duties had been to shovel scores of bodies from trucks, dripping with blood. After this he was unable to tolerate such things as a dripping tap, some sights and sounds never go away.

The couples dream of a house in Cornwall, where they would one day keep chickens, kept them both going through tough times, as when she had a miscarriage while he was far away in Afghanistan.

Christina tells of her feelings the day prior to Olaf being killed, "That night I had an overpowering premonition ... at one point I got up and emailed him: 'Don't go out on the ground tomorrow. Cut the last day - don't do it.' He never got the message."

The next morning she had a heavy feeling, unlike she had ever felt before. She describes it as being as 'powerful as thunder.'

That night she put her son to bed at 9.20pm. Shortly after two men in Army uniform were at the door. Her worst fears had come true.

Christina now says that her husband, "... still keeps me going - by sending messages through a medium."

The more I read about Afghanistan the more wrong the war seems. Equipment is poor, the men are doing more duties than they should and horrifically lives of young men are being lost (from lots of countries).

Here's what Christina says about when Olaf was preparing for Afghanistan:

"We'd had to buy everything, as the stuff issued by the (UK) Army was rubbish - like heavy protection suits that were too hot to wear and provided a target for the Taliban.  Olaf gave me a list of websites so I could order more and send it on to him."

Olaf told her, "Let everyone know what's going on out there. Let them know of the shortages and the corner they backed me into.  None of us mind doing our job, but we shouldn't be doing 25 other people's jobs too."

Christina Schmid has written a book: Always By My Side: Losing the love of my life and the fight to honour his memory

Email ThisBlogThis!Share to TwitterShare to FacebookShare to Pinterest
Labels: Afghanistan