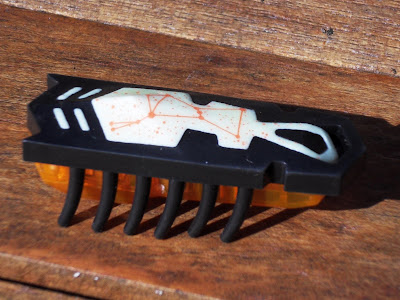 On Monday I published a post Mysterious Links Of The Ancients To Orion And The Afterlife. This is about how the ancient stones of the Hurlers Circles and Thornborough's Three Henges appear to replicate the constellation of Orion's belt. Following this a couple of synchros followed.

I thought no more about Orion but the same day we had visitors, one of them being a small girl called Imogen. She had with her a new toy: a Hexbug or sometimes called an X Bug, or so I'm told. I'd never seen these before but straight away I noticed that on it's back it had the Orion constellation! Quite a coincidence I thought, so I took the photo above of her bug.

These Hexbugs, according to Amazon, are 'robotic creatures that behave like real bugs. Each Nano Series features different colors and graphics' - so there could have been many things on the back of Imogen's bug.

After our visitor's had left I was in my office and for some reason opened a book I have on Egypt. I read about how the Great Pyramid has shafts aligned with stars including Orion. It went on to say:

"Orion was possibly intended as the destination of the king's ba or spirit when he ascended to take his place among the circumpolar stars."

The stars that make up Orion's belt are between 800 and 1400 light years away and are known in Spain and Brazil as 'The Three Marys' and in several other countries as 'The Three Kings'. So there is a somewhat religious feel to the names.

It's interesting that Orion is often associated with Sirius. For example I read:

"The simplest way to find Sirius in the winter sky is to extend an imaginary line eastward along Orion's belt and to extrapolate it to the next group of stars. The brightest star that you approach using this crude but effective method is Sirius."

The Dogon people of West Africa claim that they have knowledge which came from the Nommos who visited earth from the Sirius star system - see my post Knowledge Learned From The Fish-like Aliens.

I realise I'm going off on a bit of a tangent, okay several, but maybe, just maybe, there is much more to the Hurlers and the Thornborough Henges than them simply being calenders, as many would have us believe. If we join up some of the dots who knows what picture we could come up with - visitors from far off planets, UFOs, secret knowledge and ... well, all sorts of things if we want to let our imaginations take flight.