Medieval Cornish Huer's Hut Without The Hue And Cry 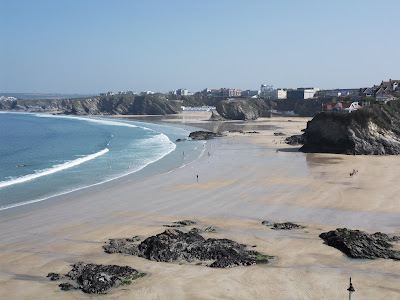 It was my wife's birthday last week (28th March) so we went to Newquay on Cornwall's north coast for the day and for a nice meal. The rest of the family were working, so we saw them in the evening.

It was a glorious day for late March with blue sky and lots of sunshine. More like summer than early Spring.

Midday we had our meal at a pub and restaurant called the Fort Inn, which has some of the best views in Newquay. The photos above and below were taken from their restaurant.

The top picture is looking to the right at some of Newquay's excellent beaches and the one below shows the view looking left to a small quay with it's fishing boats - the tide was out. 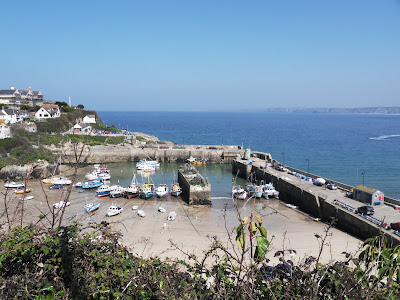 After the meal we went for a walk to a headland and away from the town as I wanted to find something to put on this blog. In all honesty the town itself doesn't do the beaches, cliffs and views justice.

I remembered the Huer's Hut (pic below) and thought it might be of interest to 67 Not Out readers as it dates back to at least the 14th century. 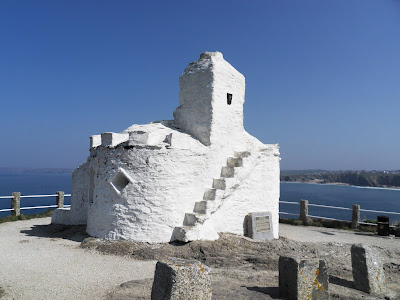 Before becoming the Huer's Hut it was most likely a hermitage. The hermit would have had the job of lighting beacons to guide shipping.

It was after this that it became to be used by a huer (from the saying hue and cry).

The huer was a lookout for when shoals of pilchards were expected in the local sea. A call on his horn raised the hue and cry informing the townsfolk that the fish had been sighted. Then, by a series of hand signals, he would guide the fishing boats to where the pilchards were seen. They could then surround the shoal with their nets and hopefully get a good haul. 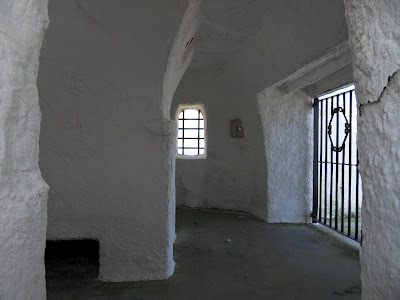 The building itself, or hut as it's called, has a typical Cornish medieval chimney and a narrow set of stairs leading to the roof for use by lookouts or huers. 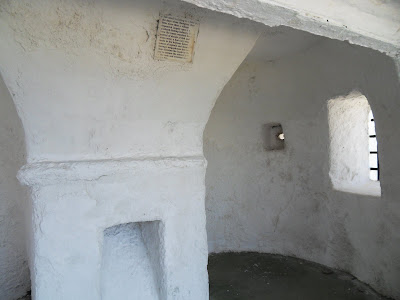 There are two windows and an early fireplace which can be seen in the photo above.

After our walk we sat overlooking Newquay's Pentire surfing beach and enjoyed a cup of tea ... 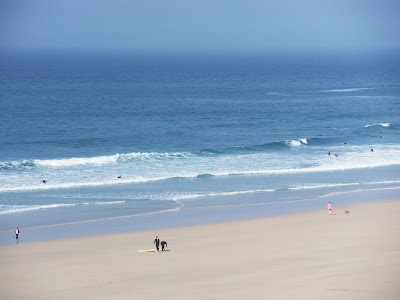 In the evening we saw the rest of the family and had birthday cake made by our special daughter-in-law. A good day and, as the saying goes: The sun shines on the righteous! That would no doubt be Karin, more than me.