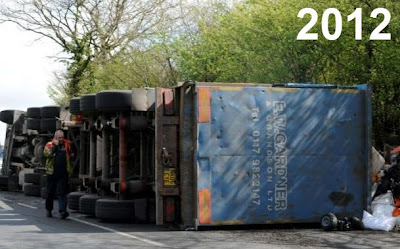 Look at the two photos on this post, above and below. You'll no doubt be thinking they were taken at the same time, one a bit nearer the camera than the other. But, oh no, you'd be wrong!

I guess the years of 2011 and 2012, which I have put on the photos, will give the game away. This is one mighty big vehicle coincidence.

This is the same lorry (Reg: NK05 CYE) - one year apart - which turned over in exactly the same place with a same style crash. This was on the B4069 road at Lyneham Banks, Wiltshire (UK) - as per the year before.

In 2011 there were slightly more leaves on the trees, if you look top left of the photos, but otherwise the waste disposal lorry is in exactly the same spot.

According to the owners of the lorry, EW Gardner and Grandson, both drivers - the one in 2011 and now 2012 - have been sacked. Their spokesperson said, "The drivers were going too fast for the road. We do not wish to comment any further."

So there we go, quite a coincidence! 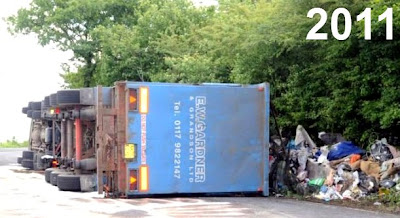