The Woman Who Communicates With Animals 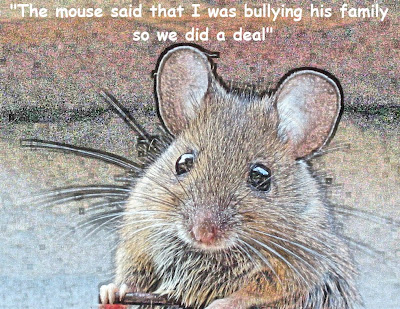 Pea Horsley, the UK's first professional animal communicator, chats with animals and what's more they reply to her - and she understands what they say!

An example? Okay this happened when she had mice in her kitchen - and you must promise not to giggle.

Pea spotted one of the mice and asked him to come forward for a talk, they had been nibbling at her food. She began by sending him feelings of love and tried to talk to him, but he wasn't listening. He was in fact livid.

Pea said, "I'd like to talk to you about the food you are eating." He screamed at her and then answered, "I'm not going to stop eating! You humans are all the same - you're bullies. You don't care for us. What am I meant to do? It's cold and and I have a family to feed."

Pea told him, "I'm not asking you to stop eating the food; I just want to make a deal with you. I suggest that during the cold months I leave you and your family dog biscuits in a white dish. The rest of the food is out of bounds."

It seems that the mouse agreed to this compromise and all was well within the household.

Now some of what Pea Horsley claims does seem a little hard to believe but she has helped many pet owners. Such as a lady called Celia who's cat Joey had disappeared.

Celia emailed a photo of Joey and, while looking at this, Pea felt a sense of uneasiness and anxiety. She asked, "Are you okay?"

She asked him where he was and he said he was in the basement by the boiler. Pea asked for more information, "Can you show me more of this place?" She then saw a door and concrete steps. There was a green metal door hinged on the right with a handle on the left. She could see the cat in a dark empty space, lying by a wall and could make out a window with horizontal bars.

All of this information was passed on to Celia and, sure enough, the cat was found exactly as described, after having been missing for six days.

Celia has lots more tales to tell. There's Fred the goldfish who likes rock music, Scopino the tortoise who loves blondes and then there's Mr. Butch the rabbit with attitude!

As to whether you believe Pea Horsley or not is up to the individual but Pea says, "My journey into animal communication has brought me the very thing the soul longs for - intimacy - and I feel my life is so much richer for it because, in the end, connection is what life is all about."

Pea's Book
Amazon US: Heart to Heart by Pea Horsley