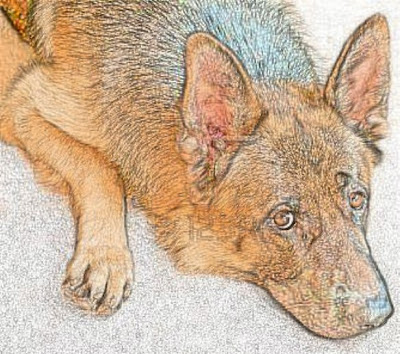 A sad little story today illustrating a dog's love and friendship for the human in his life.

Miguel Guzman lived in Villa Carlos Paz, Argentina and died back in 2006.

He had a German Shepherd dog called Capitan and, after Miguel died, Capitan ran away from home.

A week later, when Mr. Guzman's family went to pay their respects, they discovered Capitan howling by the grave.

Mr. Guzman's widow, Veronica, said, "We had never taken Capitan to the cemetery, so it is a mystery as to how he found his way there."

That, in itself, would be very touching and a little mysterious but Capitan is still at the cemetery, six years later, and refuses to leave Miguel's graveside.

The cemetery director, Hector Baccega, and his staff feed Capitan every day. He said of the dog, "He turned up and started wandering around until he found the tomb. During the day he sometimes has a walk, but at 6pm sharp he lies on the grave and stays there all night."

Treat a dog right and they will love you for life and, it seems, beyond.


Kindly note:
I am having my op tomorrow - a laparoscopic nephrectomy - and will therefore be away from blogging for a few days while I'm in hospital. Hopefully I won't be in too long.

Will catch up with you soon. My thanks to everyone who has kindly sent me emails or has left comments - appreciated very much.