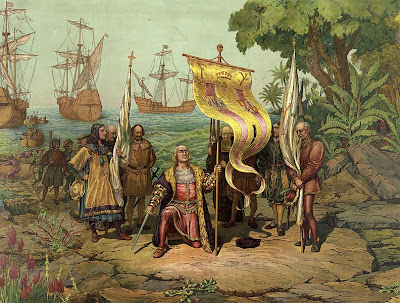 Here's a sort of coincidence I was sent, though nothing too dramatic. It's okay I suppose as trivia for a lazy Sunday.

As I understand it Monday will be a public holiday in the USA, known as Columbus Day. This is the nearest Monday to the anniversary of Christopher Columbus arriving in the Americas on October 12th, 1492.

Now, for people living in Boston, Massachusetts this helps them remember the phone number for their Boston Symphony Orchestra i.e. 617.266.1492

It also appears that while their Symphony Hall was being built back in 1900 they were temporarily housed at the Mechanics Hall on Huntington Avenue, Boston. Old records seemingly state: "... reserved seats, either at tables or in the balcony, can be secured by telephoning to the special telephone, Back Bay 1492."

Wikipedia states that the Mechanics Hall, "... was razed for the Prudential Center urban renewal project of the early 1960s."

So that's it, the number 1492 being the coincidence. Okay you may groan if you want!