Words Of Immortality And The Big Bang 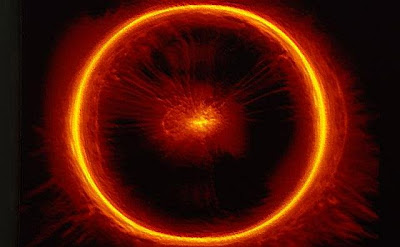 Yesterday I rambled on a bit about immortality and the Big Bang and how the universe, as we now know it, may have come about. One of the things that bothered me was where the gases for the Big Bang came from, and what was there prior to the big event happening.

Many others have wondered this too, here are four such quotes about the Big Bang:

"The Big Bang bothers science because it clashes with scientific religion - the religion of cause and effect, the belief that every effect has a cause. Now we find that the biggest effect of all, the birth of the universe, violates this article of faith ... what came before the Big Bang is the most interesting question of all."
~ The director of the U.S. National Aeronautics and Space Administration’s Goddard Institute for Space Studies

"Astronomy leads us to a unique event, a universe which was created out of nothing."
~ Arno Penzias

"There are some questions that scientists can never answer. It may be that the Big Bang happened 12 billion years ago. But why did it happen? How did the particles get there in the first place? What was there before?"
~ Tom Utley

"One may wonder, what came before? If space-time did not exist then, how could everything appear from nothing? Explaining this initial singularity - where and when it all began - still remains the most intractable problem of modern cosmology."
~ Andrei Linde

I also mentioned immortality yesterday so a few quotes on this as well:

"Whence comes the powerful impression that is made upon us by the tomb? Are a few grains of dust deserving of our veneration? Certainly not; we respect the ashes of our ancestors for this reason only - because a secret voice whispers to us that all is not extinguished in them. It is this that confers a sacred character on the funeral ceremony among all the nations of the globe; all are alike persuaded that the sleep, even of the tomb, is not everlasting, and that death is but a glorious transfiguration."
~ François-René de Chateaubriand

"Without a belief in personal immortality, religion surely is like an arch resting on one pillar, like a bridge ending in an abyss."
~ Max Müller

"The human mind cannot be absolutely destroyed with the body, but something of it remains which is eternal. We feel and know by experience that we are eternal."
~ Baruch Spinoza

"Talking to a peasant one day, I suggested to him the hypothesis that there might indeed be a God who governs heaven and earth, a Consciousness or Conscience of the Universe, but that even so it would not be sufficient reason to assume that the soul of every man was immortal in the traditional and concrete sense. And he replied, 'Then what good is God?'"
~ Miguel de Unamuno

"'Tis immortality, 'tis that alone,
Amid life's pains, abasements, emptiness,
The soul can comfort, elevate, and fill.
That only, and that amply this performs."
~ Edward Young

"If I stoop
Into a dark tremendous sea of cloud,
It is but for a time; I press God's lamp
Close to my breast; its splendour soon or late
Will pierce the gloom; I shall emerge one day."
~ Robert Browning

"The nearer I approach the end, the plainer I hear around me the immortal symphonies of the worlds which invite me. It is marvellous, yet simple."
~ Victor Hugo

Though some of us may believe in immortality I'm sure at times we have our doubts. Tennyson summed up this feeling:


Ah, Christ, that it were possible,
For one short hour to see
The souls we loved, that they might tell us
What and where they be.
~ Alfred Tennyson

Positive Last Words On His Death Bed
I have been dying for twenty years, now I am going to live.
~ Jas. Drummond Burns

Further Reading:
The Journey Of Immortality
Could Time And Space Eventually Prove Immortality
Manipulating Time In A Spaceship