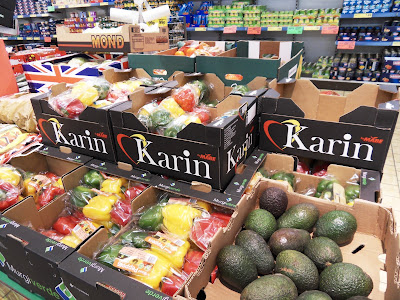 We had someone coming for a meal and my wife (she was doing the cooking) wanted some peppers, so we decided to walk to the nearest small supermarket.

On the way we met another Karen who Karin knows - same name, but a different spelling. My wife's is the German version.

Afterwards, for some inexplicable reason, we started talking about the two versions of the name, "Ah," insisted Karin, "but you rarely see Karin spelt my way (with an i) in England."

And who was I to disagree.

We went into the supermarket heading for the peppers and there it was: her name Karin (as per the photo) three times and in boxes containing - yes - the peppers we wanted!

Never, ever seen boxes like that previously. I'm sure 'someone' is having a laugh at our expense when such 'coincidences' happen.

Other coincidence or synchronicity stories:
The Red Balloon Coincidence
Famous Coincidences: King Umberto I
The 7/7 Coincidence Which Saved Lives