The Snow That Is Only In The Mind And Our Imagination 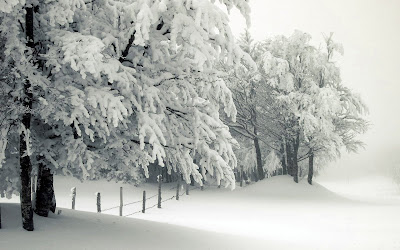 I've mentioned several times in posts about how there is no reality. There is only our realisation of how things are. I got thinking on this theme because of the Christmas cards we have received.

Many of the cards feature a White Christmas, with snow topped houses and perhaps a snowman. It's the idealised image (at least in the UK) of what Christmas is like. But this isn't the reality.

During the 20th Century there were only seven official white Christmases in England. This doesn't even mean that the ground was covered by snow. It simple means: 'a single snowflake (perhaps among a mixed shower of rain and snow) has been observed falling in the 24 hours of 25 December' (source UK Met Office).

So where did this idea of a White Christmas come from?

It could well be from the writings of Charles Dickens and other authors from that period. In a Christmas Carol, for instance, it's as if a White Christmas happens each and every year. Over the years this idea has become enforced into our minds, by the likes of that famous Irving Berlin song and in a myriad of other ways.

Somehow we come to associate December 25th with snow covered scenery but, as with much in life, this isn't the reality (in England).

However, if we look back to when Dickens was alive (7 February 1812 - 9 June 1870) the climate was different. During the first eight years of his life there was in fact a white, traditional Christmas every year - for he lived during, what is known as, the Little Ice Age.

The period of this Little Ice Age is debatable but was probably from around 1350 to 1850. Out of interest this was preceded by the Medieval Warm Period (about 950 to 1250) when temperatures were higher. So, yes there are cycles of climate change.

I won't delve into the controversies of Climate Change at this time but I think we have to be careful as to what we accept as being reality. It's sometimes good to question old or even popular beliefs as it's easy to get kidded into accepting some strange ideas as being reality.

Random Other 67 Not Out Posts:
The Devil's Great Thunderstorm Of 1638 At Widecombe On Dartmoor
The Reality That Probably Isn't Actually There
The Time Shift Into Another Era Or Life

Email ThisBlogThis!Share to TwitterShare to FacebookShare to Pinterest
Labels: Belief, Christmas, Power of the Mind, Reality