White Doves Acting As Messengers From The Dead 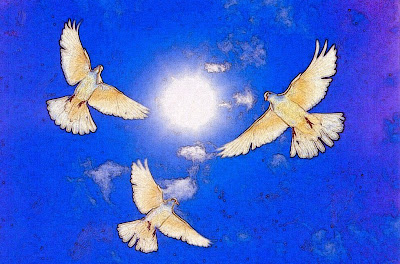 I published a post a while back about The White Dove Being A Messenger Of The Dead. This told of Dan's experience with a white dove when his aunt died.

In response to this post other 67 Not Out readers have responded with their own experiences similar to Dan's. Here are two of them.


"I went today and placed a memorial garden stake on my best friend's grave who died two months ago today (I just now realized that the date was significant).

While I was there I prayed and asked to feel her presence. I wanted assurance that she was in Heaven and happy now.

When I left, I did not feel any particular assurance, other than having a good feeling from visiting her burial site and placing a memorial, with her photo, so people can remember her beautiful smile.

When I returned home, there was a white bird sitting near my driveway between her old house (we used to be neighbours) and mine.

When I got out of my car to investigate (I was afraid it was someone's pet bird) I discovered that it was a white dove.

I immediately felt assurance that my friend was in Heaven and she had sent this white dove as a message to let me know that all is well."


"My husband and I where on the way to see my mother and we saw three doves flying in formation.

The three doves where flying so close to my car that I almost had to pull over. I was so afraid they where going to hit my car but they stayed right by the side of it.

My mother was in good health when we arrived.

On our way home, however, we heard on the car radio of an awful car accident locally, where three people had been killed. I don't know if there was any connection with the three doves but it was on the same stretch of road."

Other 67 Not Out Blog Posts:
White Feathers Comfort The Bereaved
A Secret Freemasons View Of Old Age And Death
Near Death Experience In The Stars